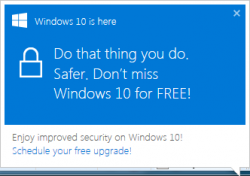 Just to add my 3cents( inflation), I have used Win7 for many years without a hitch. The only problem are “updates” by MS that are forced on us. I spend a lot of time on my PC and right in the midst of my work, I get a shut down is imposed, and I have to wait for the “upgrade” to complete before I can resume my work. I believe the problem is simple. It comes down to $$$. Microsoft hires techs who need to justify their existance, and writing “updates” (although many times unnecessary) this
is a way for them to
keep their job, on our “timeclock”. I cannot offer a reasonable solution other than purchasing a high end Mac, which creates another host of issues.
Comment (1)
#1 Richard on 2019-04-11 21:26 (Reply)