Little bit of background about having certificates

Google called for “HTTPS Everywhere” (secure search) at its I/O conference in June 2014 with its Webmaster Trends Analyst Pierre Far stating: “We want to convince you that all communications should be secure by default”

So, anybody with any sense in their head have moved to having their website prefer HTTPS as the communication protocol. For that to happen, a SSL certificate is required. In practice any X.509 would do the trick of encryption, but anybody visiting your website would get all kinds of warnings about that. An excellent website having failing certificates is https://badssl.com/. The precise error for you would see having a randomly selected certificate can be demonstrated at https://untrusted-root.badssl.com/.

Google, as the industry leader, has taken a huge role in driving certificate business to a direction it seems fit. They're hosting the most used website (google.com, according to https://en.wikipedia.org/wiki/List_of_most_popular_websites) and  the most used web browser (Chrome, according to https://en.wikipedia.org/wiki/Usage_share_of_web_browsers). So, when they say something, it has a major impact to the Internet.

What they have said, is to start using secured HTTP for communications. There is an entire web page by Google about Marking HTTP As Non-Secure, having the timeline of how every single website needs to use HTTPS or risk being undervalued by GoogleBot and being flagged as insecure to web browsing audience.

Little bit of background about what certificates do

Since people publishing their stuff to the Net, like me, don't want to be downvalued or flagged as insecure, having a certificate is kinda mandatory. And that's what I did. Couple years ago, in fact.

I have no interest in paying the huge bucks for the properly validated certificates, I simply went for the cheapest possible Domain Validated (DV) cert. All validation types are described in https://casecurity.org/2013/08/07/what-are-the-different-types-of-ssl-certificates/. The reasoning, why in my opinion, those different verification types are completely bogus can be found from my blog post from 2013, HTTP Secure: Is Internet really broken?. The quote from sslshopper.com is:
"SSL certificates provide one thing, and one thing only: Encryption between the two ends using the certificate."

Nowhere in the technical specifcation of certificates, you can find anything related to actually identifying the other party you're encrypting your traffic with. A X.509 certificate has attributes in it, which may suggest that the other party is who the certificate says to be, but's an assumption at best. There is simply no way of you KNOWING it. What the SSL certificate industry wants you to believe, is that they doing all kinds of expensive verification makes your communications more secure. In reality it's just smoke and mirrors, a hoax. Your communications are as well encrypted using the cheapest or most expensive certificate.

Example:
You can steal a SSL certificate from Google.com and set up your own website having that as your certificate. It doesn't make your website Google, even the certificate so suggests.

Little bit of background about Symantec failing to do certificates

Nobody from Symantec or its affiliates informed me about this. Given, that I follow security scene and bumped into news about a dispute between Google and Symantec. This article is from 2015 in The Register: Fuming Google tears Symantec a new one over rogue SSL certs. A quote from the article says:

On October 12, Symantec said they had found that another 164 rogue certificates had been issued
in 76 domains without permission, and 2,458 certificates were issued for domains that were never registered.

"It's obviously concerning that a certificate authority would have such a long-running issue
and that they would be unable to assess its scope after being alerted to it and conducting an audit,"

So, this isn't anything new here. This is what all those years of fighting resulted as: Replace Your Symantec SSL/TLS Certificates:

Near the end of July 2017, Google Chrome created a plan to first reduce and then remove trust (by showing security warnings in the Chrome browser) of all Symantec, Thawte, GeoTrust, and RapidSSL-issued SSL/TLS certificates.

In short:
They really dropped the ball. First they issued 164 certificates, which nobody actually ordered from them. Those rogue certificates included one for google.com. Then they somehow "lost" 23k private keys for already issued certificates.

That's really unacceptable for a company by their own words is "Global Leader In Next-Generation Cyber Security". That's what Symantec website https://www.symantec.com/ says, still today.

I did check the cert of this blog, and yup. It flagged the certificate as one needing immediate replacement. The certificate details have:

As instructed, I just re-issued the existing certificate. It resulted in: 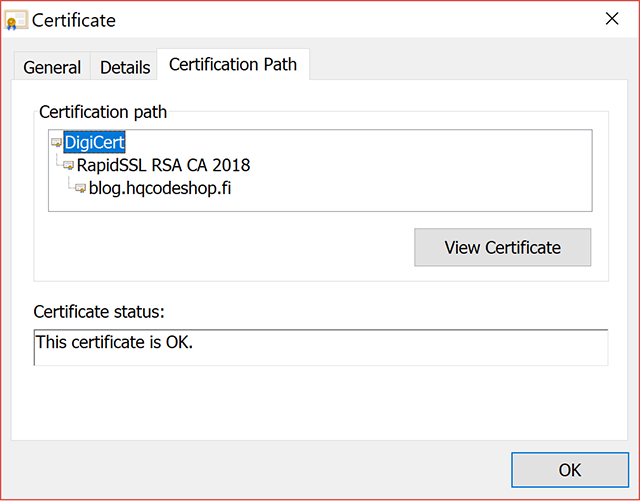 Now, my certificate traces back to a DigiCert CA root.

That's all good. I and you can continue browsing my blog without unnecessary this-website-is-not-secure -warnings.