Emotet is a nasty piece of malware. It has been around The Net for number of years now and despite all the efforts, it is still stealing money from unsuspecting victims who log in into their online bank with their computers and suddenly lose all of their money to criminals.

Last month, I bumped into a "historical" Emotet-reference. A document contains the URLs for malicious distribution endpoints of documents and binaries used to spread the malware. It also contains IPv4-addresses for Command & Control servers. There are hundreds of endpoints listed, and every single one I tested was already taken down by ISPs or appropriate government officials. Surprisingly, only 20% of the URLs were for Wordpress. Given its popularity and all the security flaws, I kinda expected the percentage to match its market share, 35% of all the websites in the entire World run Wordpress. If you're reading this in the future, I'd assume the percentage to be higher.

As a coding exercise, I analysed the listed endpoints for all three variants (or Epochs as this malware's generations are called) of Emotet and created a heatmap of them. It would be really fun to get a list of all the infected computers and list of those computers where money was stolen from, but unfortunately for my curious mind, that data wasn't available.

So, no victims, only hijacked servers in this map: 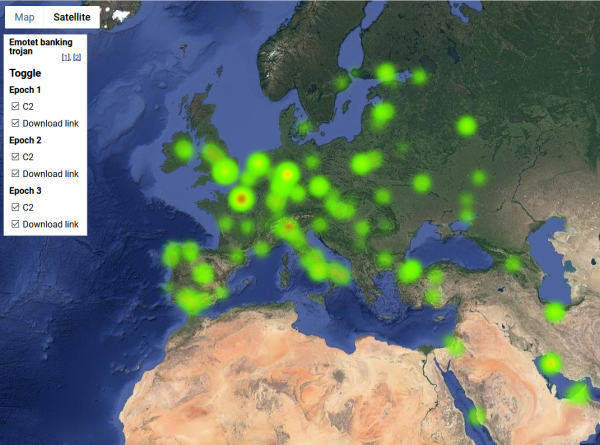 Actual Google Maps -application I wrote is at https://blog.hqcodeshop.fi/Emotet-map/map.html, go investigate it there.

This is a simple project, but if anybody want's do learn data visualization with Google Maps JavaScript API, my project is at https://github.com/HQJaTu/emotet-malware-mapper. Note: You will need an API-key from Google for your own projects. My API-key is publicly available, but restricted. It won't work for you.

As analysis of the hijacked distribution points and C2 -servers, there is lot of heat in obvious places, Europe and North America. But as you can see, there are lots of servers in use all around the globe. That should give everybody an idea why fighting cybercrime is so difficult.

Update 30th Jan 2020:
Emotet seems to be picking up speed, there is a US CISA warning about Increased Emotet Malware Activity. Apparently it is #1 malware currently in the world.