When I was a kid growing up with computers, there was one (1) definite medium for a Finnish nerd to read. MikroBitti.

For any youngster it will be exteremely difficult to comprehend an era of computing without Internet. It did exist, I did live (and almost survive) through it.

Among the scarce resources was code. Magazines printed on paper published source code for platforms of that era. Regular people copied the code by typing (mostly incorrectly) in an attempt to obtain more working software. As we know, a single mis-typed character in a 10000 character code will crash the entire thing, at minimum produce unpredictable results. Then came modems and era of BBSes. Before that happened, I was sure to learn everything I could from those magazine-published codes. I did that even for platforms I didn't own nor have access to. 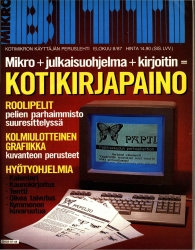 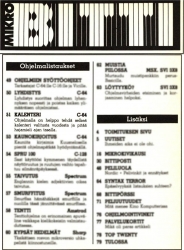 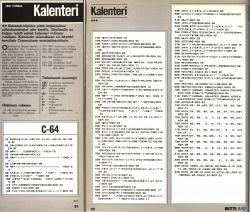 A trivial C-64 BASIC application by an unknown software engineer wanna-be producing a calendar for a given year. It even could print the calendar if you owned a printer.

Background info:
The code was written with a C-128 in C-64 mode. I was aiming for a larger audience C-64 had at the time. I don't remember the fee I received from this, but in my imagination it must have been something around 300 FIM. By using the Value of money converter @ stat.fi, 300 FIM in 1987 would equal to ~95 € in 2019. At the time, the low amount didn't matter! That was the first ever monetary compensation I received for doing something I was doing anyway. For all day, every day.

The brief intro for the calendar app was cut half by editor. What remains is a brief Finnish introduction about the purpose of the app and for other wanna-be software engineers a description what the variables in the code do.