This is my 2nd attempt of trying to clarify how to get Dolby Digital 5.1 output via HDMI. The previous attempt can be found here. All the information I can find on this subject shows that for some people multi-channel audio works fine, nothing special is required, but then again for some of us this is a pain and its almost impossible to get this working.

Here is my setup: 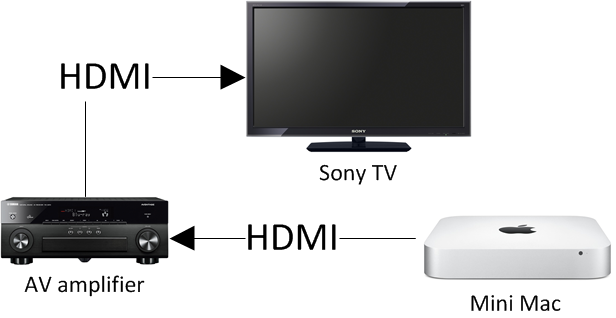 The Audio MIDI setup clearly displays as Sony TV being the HDMI output device. The problem is, that it actually isn't. Here is another screen capture of Audio MIDI setup from my brother's computer:

Whoa! His Mac Mini displays his A/V amp as the HDMI destination. Totally different from what my Mac displays. The only explanation for this is, that my Yamaha takes the TV's spec from the HDMI and proxies it to the Mac and his Onkyo doesn't take anything, it simply presents itself as the destination. If you'd ask me, Onkyo's solution is much better than Yamaha's. Anyway, the amp has to pick up the audio signal to be sent to loudspeakers and do a stereo mixdown of a multi-channel signal to be sent for the TV. So there will be a lot of processing at the amp, why not declare itself as the destination for the Mac. It seems to be confusing.

Here is what I did to get proper 5.1 channel sound working from my Mac Mini. The problem is, that I cannot get it back to the broken mode again, it simply stays fully functional no matter what I do. There must be something going on at the amp end and something else going on at the Mac end. For some reason they don't match or they do match and there is very little I can do to control it. But anyway, here are my steps with Audio MIDI Setup utility:

This fix and pretty much everything about Mac Mini's HDMI audio output is bit fuzzy. Any real solution should be reproducible somehow. This isn't. But I can assure you, that now my multi-channel audio really works as expected.

Any feedback about this solution is welcome!

Update 1st Jan 2014:
The number of channels configured into Audio Setup does not reflect the actual number of speakers you have. That is done in Configure Speakers. I have 8ch (or 8 speakers) configured in the Audio Setup, but this is a screenshot of my speaker setup:

They have different number of speakers! It still works. That's how it is supposed to be.

Hi
I must be doing something incorrectly but I only have 2ch option in the midi setup (the 5.1 option is greyed out when I try configuring the speakers)...

My set up is very similar to you:
MacMini to Onkyo receiver via HDMI
and receiver to Samsung TV via HDMI

Would you be able to help?
thank you
Comment (1)
#1 mike on 2014-01-01 09:44 (Reply)
Ok. The information you gave is a bit scarce, I'm trying to track your steps to see at which point you cannot proceed. You do have 8 channels for HDMI? After you have confirmed that, what happens when you click Configure Speakers ... at the bottom of the window? You see a picture of two-speaker setup and cannot change it to multi-speaker setup because it is grayed out?
Comments (20)
#1.1 Jari Turkia on 2014-01-01 16:55 (Reply)
I have 6 channels (not 8 but I wouldn't think it matters so much)
when i click configure speakers I see 2 channels only and any other option but stereo is greyed out...
Comments (3)
#2 michael on 2014-01-01 17:54 (Reply)
I wrote an update about that into the blog entry with a screen capture of my own speaker setup. What you'll have to do is some mental work and try to detach the number of channels (which your Mac will be able to produce, if so configured) from the actual channels managed by your amp (the physical loudspeakers you have there).
Comments (20)
#2.1 Jari Turkia on 2014-01-01 18:11 (Reply)
sorry I do not get it, what do you mean mental work?
Comments (3)
#2.1.1 michael on 2014-01-01 21:35 (Reply)
I mean that in your thought detach the physical world with your amp and speakers in it from the imaginary world where there are capabilities of your Mini Mac. They do not have to be exactly same. For that reason set your Mac to have 8 channels, even if you don't have that many speakers in your audio system.
Comments (20)
#2.1.1.1 Jari Turkia on 2014-01-02 09:10 (Reply)
In the audio mini panel, I actually dont have the 8 channel option available. It is greyed out. Any idea?
Comments (3)
#3 michael on 2014-01-03 05:45 (Reply)
Ok. That explains why the 5.1 channel setup is also grayed out. You cannot get extra 4 speakers out of 2 channels. But the reason why your box refuses to enable multi-channel setup is beyond me. I would debug the particular HDMI-input with some other device to make sure it functions properly, but I really have no clue what's going on there.
Comments (20)
#3.1 Jari Turkia on 2014-01-03 09:01 (Reply)
I, too, have a Yamaha amp that is not recognized by the Mac Mini (the Mini picks up my Samsung TV on the other side of the Yamaha). In following your steps, I get the 8-channel option, and the speaker test tones work correctly; however, the actual audio playback is only stereo (this happens even with an HD local movie via Quicktime, and an HD movie via Netflix). I assume that's because the Samsung TV only has two speakers(?). In other words, the only way it may be possible is to get the Mac Mini to actually recognize the Yamaha. Any thoughts on that?
Comment (1)
#4 Matt on 2014-01-05 20:35 (Reply)
I did a test with a QuickTime file which has 5.1 channel audio in it. There are a number of them freely available for download at http://trailers.apple.com/. Not all of them have 5.1, so be sure to confirm that with movie inspector. The bottom line is: no issues. The sound does work as expected. I even physically disconnected my front left and right channels so, that I can confirm the quality of the sound from other channels. Still, it works like a dream. Did you confirm your audio setup on Yamaha end? See the pics about Yamaha from http://blog.hqcodeshop.fi/archives/39-Mac-OS-X-Dolby-Digital-5.1-with-Mac-Mini-Not-solved.html
Comments (20)
#4.1 Jari Turkia on 2014-01-06 10:48 (Reply)
Thanks for this. I was getting stutter issues in XBMC with DTS videos and I couldn't figure it out for the life of me.

Now, though, I'm not sure if the following happened because I unplugged the HDMI cord and changed it to a different port or if the receiver cycles the settings every time it is shut off. Anyways, the stutter returned and I had to repeat the steps here, but viola, all was well again. I'll report back if it was the HDMI port change or the receiver shutting off. Hopefully the former, so that I don't have to mess with these settings every time the receiver gets turned off and on.

You are 2nd person to comment, that the multi-channel selection is not available. However, like I wrote in my post, I cannot even retrace my own steps. I cannot get the sound setup broken anymore, it is only in the working mode. It looks like the Mac has a life of its own and user's wishes have very little to do with that.

The strange fact ist that the Samsung TV has the DTS option greyed out in it's settings, like it does not receive or ABLE to receive such signal, but the option is there.

What I'm thinking is the Samsung HDMI drivers that OSX has by default is only for two channels through HDMI.

It's pretty crappy, to have to buy an external sound card with optical out to pass it to the amp.

Can anyone else confirm my suspicion that this might be a driver problem, if so, how can it be fixed.

I have a PS4 and my MacBook Pro and the Tv.

So, I have the following connections:

1,2 works, but the 3>4 flow isn't working. the amp does not have a HDMI port so I can connect directly to it.

In my opinion you're pushing the envelope here. Now that Mac is notoriously difficult to setup into multi-channel and given your complex cabling, unfortunately you're on your own there. This is the part where you break the envelope and wings start to tear off.

Thanks for the good post to solve the problem. I just bought EOL 2012 mini couple of days ago and I was very disappointed when noticed that multichannel sound is not working.
Setup is Denon X-4000, mini, and Optoma projector. All connected with HDMI. Mini - Denon - Optoma.

I have exact same issue you had the solving goes exact same way except my setup is not yet working correctly.
encoded digital Audio -> the same happens as you faced. All sounds are drive through mini´s own speakers.
I changed it back 8ch-24bit integer and I am able to get the test sound from speaker configuration for each speaker correctly. Netflix, iTunes or youtube doesn´t seem to push multichannel to receiver. I finally downloaded VLC and 7.1ch test track. It works fine. All channels are working correctly. At least some hope for this setup to serve as media server.

I´ll keep looking for solution, if anything else pops to your mind, I´d appreciate to hear it.
Comment (1)
#9 JaniAa on 2014-10-30 22:18 (Reply)
Hi,
I have the exact same setup. The new mac mini connected to my YamahaRx-V373 receiver that is connected to my samsung tv. I`ve done the steps and when configuring the speakers and testing it works fine. But when playing something that is 5.1, it stays always in PCM... it does not work!!! the mac mini continues to display that is connected to the Samsung TV. Any help?
Comments (2)
#10 Douglas on 2014-11-27 09:35 (Reply)
As I tried to say in my blog post, that I cannot make my Mac Mini 5.1 setup broken again to test what actually fixed my setup.

It seems to live a life of its own and nobody knows the rules.

Also tried TOSlink, no dice. I think the Mac has decided not to send encoded audio no matter how I set it.

many models of older generations just do not support multi channel sound.

I have a mac mini 2009 late model and I used a hdmi via the mini display - however get no sound.

Is there a way to get mutichannel sound on a mac mini 2009 model ?

Now that I managed to lure the Mini to output multi-channel sound, it has remained to do so. I assure you, the cables I have around the house are of decent quality and the Yamaha amp(s) I've run it with have been configured for multichannel. Also, the amount of feedback I got for my post indicated that there was something going on at the time. I don't know today, if this is still an issue to somebody. I would have to guess, that no.
Comments (20)
#14.1 Jari Turkia on 2017-07-06 06:42 (Reply)
Hi
I have a macmini 2011
And my setup is
A sony Tv with hdmi and
From sony tv a fiber optic to a bose system
How can i get 5.1 ?
Thank you !
Comment (1)
#15 Ricardo Vieira on 2017-10-19 04:08 (Reply)
If you read my blog post and some of these accompanying comments, the exact sequence isn't known. The sound setup has gotten couple of evolutions since my original post, but nobody seems to be able to point the steps to success.
Comments (20)
#15.1 Jari Turkia on 2017-10-29 15:59 (Reply)