Downgrading Internet Explorer 9 into 8 on Windows 7

That should be an easy task, right? You guessed it. If I'm writing about it, it isn't. Once in a while I still test with a real IE8. The IE10 and IE11 emulators should be good enough, but they aren't. Here are the stats from this blog: 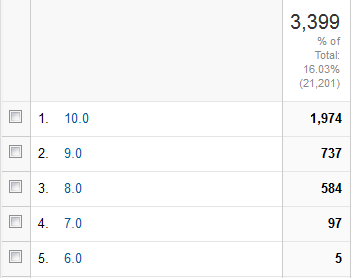 Here is what I did:

No amount of reboots, running sfc.exe or anything I can think of will fix this. This is what I already tried:

The general consensus seems to be, that you simply cannot lose IE from Windows 7. Magically I did.

Just based on the Wikipedia article about removing IE, it is possible.

I don't know what to attempt next.

Getting the worst of Windows 7 - Install updates automatically (recommended)

Why doesn't my setting of NOT installing important updates automatically stick? Every once in a while it seems to pop itself back to the stupid position and does all kinds of nasty things in the middle of the night. From now on I'll start a counter how many times I'll go there to reset the setting back to the one I as system administrator chose.

All this rant is for the simple reason: I've lost data and precious working time trying to recover it. This morning I woke up and while roaming in the house in a semi-conscious state attempting to regain a thought, I noticed couple of LEDs glimmering in a place there shouldn't be any. My desktop PC was on and it shouldn't be. On closer inspection at 3 am it chose to un-sleep for the sake of installing Windows updates. This is yet another stupid thing for a computer to be doing (see my post about OS X waking up).

The bottom line is that the good people (fucking idiots) at Microsoft don't respect my decisions. They choose to force feed me theirs based on the assumption that I accidentally chose not to do a trivial system administration taks automatically. I didn't. I don't want to lose my settings, windows, documents, the list goes on.

The only real option for me would be to set up a Windows Domain. In Active Directory there would be possibility of fixing the setting and making it un-changeable. I just don't want to do it for a couple of computers. Idiots!

Earlier I wrote about upgrading my Windows 8 into Windows 8.1. At the time I didn't realize it, but the upgrade lost my Media Center Pack.

At the time I didn't realize that, but then I needed to play a DVD with the laptop and noticed, that the OS is not capable of doing that anymore. After Windows 8 was released it didn't have much media capabilities. To fix that, couple months after the release Microsoft distributed Media Center Pack keys for free to anybody who wanted to request one. I got a couple of the keys and installed one into my laptop.

Anyway, the 8.1 upgrade forgot to mention that it would downgrade the installation back to non-media capable. That should be an easy fix, right?

After the 8.1 upgrade was completed, I went to "Add Features to Windows", said that I already had a key, but Windows told me that nope, "Key won't work". Nice.

At the time I had plenty of other things to take care of and the media-issue was silently forgotten. Now that I needed the feature, again I went to add features, and hey presto! It said, that the key was ok. For a couple of minutes Windows did something magical and ended the installation with "Something went wrong" type of message. The option to add features was gone at that point, so I really didn't know what to do.

The natural thing to do next is to go googling. I found an article at the My Digital Life forums, where somebody complained having the same issue. The classic remedy for everything ever since Windows 1.0 has been a reboot. Windows sure likes to reboot.

I did that and guess what, during shutdown there was an upgrade installing. The upgrade completed after the boot and there it was, the Windows 8.1 had Media Center Pack installed. Everything worked, and that was that, until ...

Then came the 2nd Tuesday, traditionally it is the day for Microsoft security updates. I installed them and a reboot was requested. My Windows 8.1 started disliking me after that. The first thing it did after a reboot, it complained about Windows not being activated! Aow come on! I punched in the Windows 8 key and it didn't work. Then I typed the Media Center Pack key and that helped. Nice. Luckily Windows 8 activation is in the stupid full-screen mode, so it is really easy to copy/paste a license key. NOT!

The bottom line is: Media Center Pack is really poorly handled. I'm pretty sure nobody at Microsoft's Windows 8 team ever installed the MCP. This is the typical case of end users doing all the testing. Darn!