TLS-fingerprinting. Yes. Most of regular users don't even have a concept for it.

Any regular Jane User browsing around her favorite websites can be "easily" identified as a ... well ... regular user. That identification is done by number of factors:

When putting any regular user aside and concentrating on the malicious ones, things start to get tricky. A bot can be written to emulate human to pass the detection not to raise any concerns. The only known effective method is to place a CAPTCHA for the user and make them pass it. There are known cases, where human will guide the bot trough and pass control to bot for it to continue its mischief. Given that, there's always room for new options for identifing requests.

There are number of organizations and people (including Google, Edward Snowden and US Government) to encourage people to encrypt everything. An example of this would be The HTTPS-Only Standard by US Government. Early 2020 figures indicate, that the entire Internet is ~60% HTTPS, ~93% requests arriving to Google are using HTTPS instead of non-encrypted HTTP. We're getting there, about everything is encrypted.

The thing with TLS-encryption is, the way the encryption is implemented can be fingerprinted. This fingerprint can be added to list of factors used to determine if you are who you say you are. A really good presentation about history TLS/SSL fingerprinting can be found from DETECTION ENGINEERING: Passive TLS Fingerprinting Experience from adopting JA3, but to summarize it here:

What's missing from the list is the techniques used by various government agencies and proprietary systems. It is obvious to me, they hire bunch of super-smart individuals and some of them MUST have found the fingerprinting and never telling us about it. Point here is, there has always been methods to fingerprint your encryption, you just didn't know about it.

In this blog post I'll be focusing on JA3 as it is gaining a lot of traction in the detecting Threat Actors -field of security. This post is not about dirty details of JA3, but if you want, you can study how it works. The source code is at https://github.com/salesforce/ja3 and a video of two out of three J.A.s presenting JA3 @ Shmoocon 2018 can be found at https://youtu.be/oprPu7UIEuk?t=407. Unlike source code (which has some prerequisites), the video alone should give most of you an idea how it works.

Remember, this fingerprinting originates from intrusion detection. It can be used for other purposes, but a lot of the background is from IDS. So, when studying a system for Indicators of Compromise, the theory is as follows:

A Threat Actor to change various aspects of the attack. On the bottom of the pyramid-of-pain, there are things that are trivial to alter. You can change the hash of your attack tool (if running on a system trying to detect you), or approach the target from another IP-address or change your Command&Control server to a new domain. All of these changes would throw off any attempts to detect you. Food for thought: Typical OS-commands won't change, unless upgrades are being applied. If a tool changes constantly, it's a tell.

When placing TLS-fingerprinting on the same pyramid:

Looking into one's encrypted traffic obscures some of the handy points used to detect your activity. So, neeed to shift focus to the top of the pyramid. On top there are tools and attacker's ways of working. Really difficult to change those. That's exactly where TLS-fingerprinting steps in. What if your tools leave breadcrumbs? Enough for a vigilant detection-system to realize somebody is doing probing or already has compromised the system. At minimum there is weird traffic whose fingerprint doesn't look good warranting closer look by a human.

My beef with JA3 has (so far) been the fact, that my favorite network analysis tool, Wireshark, doesn't support it. Now it does:

There is a Wireshark dissector for JA3. It is written in LUA by an anonymous GitHub contributor who chose not to divulge any public details of him/herself and me. Original version didn't do JA3S, and I contributed that code to the project. The Wireshark plugin is available at https://github.com/fullylegit/ja3. To get it working in Wireshark my recommendation is to install the LUA-plugin into your personal plugins-folder. In my Windows, the folder is %APPDATA%\Wireshark\plugins. Note: The sub-folder plugins\ didn't exist on my system. I created it and then placed the required .lua-files into it. 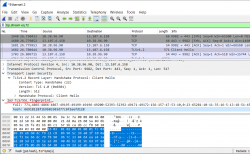 What we see on the Wireshark-capture is a TLS 1.2 client hello sent to a server. That particular client has JA3-hash of "66918128f1b9b03303d77c6f2eefd128". There is a public JA3-database at https://ja3er.com/, if you do any fingerprinting, go check your matches there. Based on JA3er, the previously captured hash typically identifies a Windows Chrome 79. Not suspicious, that one.

Security is always a chase. As we already learned, lot of (bad?) people knew about this fingerprinting for many many years. They may be already ahead, we don't really know that yet.

A good primer on how to make your fingerprint match on demand is a post JA3/S Signatures and How to Avoid Them.

Ignoring all other parts of JA3, Windows Firefox 72 will on TLS 1.2 use a 18 cipher set in prioritized order of:

That 18 cipher list in OpenSSL-format used by curl is:

Info:
My Linux curl is built to use OpenSSL for TLS and OpenSSL has a different naming for ciphers than IANA and everybody else in the known universe.

Going forward, getting all the 18 ciphers right with OpenSSL can be done. It's just too much work for me to even attempt. And I haven't got to extensions or elliptic curve parameters yet! Uff.... way too difficult to forge the fingerprint. I might have a go with that on a Python. If I have time.

This is fun stuff!

Understanding how TLS works and why it can be used as a very good indicator of your chosen tool is critical to your success. Your Tor-client WILL have a distinct fingerprint. It will be different than your Chrome, iOS Safari, Python 3 or PowerShell. Anybody having access to your encrypted traffic (like your ISP or the server you're surfing to) will be able to detect with what you're arriving.