Yeah, a mouthful. Running CentOS 8 Linux, in Java (JRE) a connection to MySQL / MariaDB there seems to be trouble. I think this is a transient issue and eventually it will resolve itself. Right now the issue is real.

Here is the long story.

I was tinkering with Databricks. The nodes for my bricks were on CentOS 8 and I was going to a MariaDB in AWS RDS. with MySQL Connector/J. As you've figured out, it didn't work! Following errors were in exception backtrace:

The last packet sent successfully to the server was 0 milliseconds ago. The driver has not received any packets from the server.
com.mysql.cj.jdbc.exceptions.CommunicationsException: Communications link failure

javax.net.ssl.SSLHandshakeException: No appropriate protocol (protocol is disabled or cipher suites are inappropriate)

Going to the database with a simple CLI-command of (test run on OpenSUSE):

... works ok.
Note: This RDS-instance enforces encrypted connection (see AWS docs for details).
Note 2: Term used by AWS is SSL. However, SSL was deprecated decades ago and the protocol used is TLS.

Taking a look on the wire: 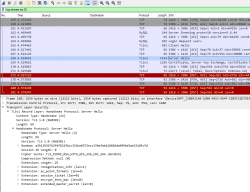 Why would anybody using those? Don't MySQL/MariaDB/AWS -people remove insecure stuff from their software? What! Why!

Troubleshooting started. First I found SSLHandShakeException No Appropriate Protocol on Stackoverflow. It contains a hint about JVM security settings. Then MySQL documentation 6.3.2 Encrypted Connection TLS Protocols and Ciphers, where they explicitly state "As of MySQL 5.7.35, the TLSv1 and TLSv1.1 connection protocols are deprecated and support for them is subject to removal in a future MySQL version." Well, fair enough, but the bad stuff was still there in AWS RDS. I even found Changes in MySQL 5.7.35 (2021-07-20, General Availability) which clearly states TLSv1 and TLSv1.1 removal to be quite soon.

No amount of tinkering with jdk.tls.disabledAlgorithms in file /etc/java/*/security/java.security helped. I even created a simple Java-tester to make my debugging easier:

As it does the trick, I followed up on it. In CentOS / RedHat / Fedora there is /etc/crypto-policies/back-ends/java.config. A symlink pointing to file containing:

That's the culprit! It turns out any changes in java.security -file won't have any effect as the policy is loaded later. Running the policy change and set it into legacy-mode has the desired effect. However, running ENTIRE system with such a bad security policy is bad. I only want to connect to RDS, why cannot I lower the security on that only? Well, that's not how Java works.

Entire troubleshooting session was way too much work. People! Get the hint already, no insecure protocols!

by Jari Turkia in Linux, Programming, Security at 20:55 | Comments (0) | Share in LinkedIn