On my home Linux server I ran out of disc space on my 2 TB hard drive. Or, technically speaking there were hundred or so unallocated megs left on my Logical Volume Manager. That translates as I hadn't yet ran out, I was about to run out of space. There was some reserves left, but it would have required some LVM-tinkering to do to unleash what was left into actual use. 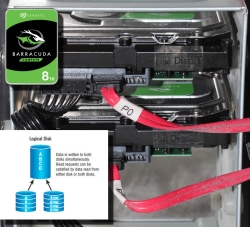 That's a pair of 8 TB Seagate Barracudas hooked up into my old-but-trustworthy LSI MegaRAID.

Yeah, you read it right. BIOS is from year 2011. The logical volume / virtual drive created by 90s-looking WebBIOS looks really nice with all those terabytes: 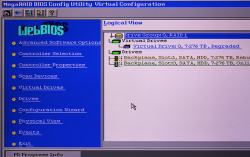 Hint: Don't do what I did and forgot to hook up one S-ATA power cable properly after finalizing installations. The mirrored RAID-1 -drive will need rebuil. On this particular LSI MegaRAID such rebuild takes ~20 hours to complete. Good thing, the drive was fully available during the operation. It did respond bit slowly during rebuild, but that's what spinning platters do anyways.

Amounts of data I seem to have lying around at my home server is a handful. This simple LVM-tinkering sequence of vgextend / pvmove took nearly five hours to complete. This is one of the multiple advantages of having a logical volume, there exists capability to tell at which physical drive a volume resides at.

When I made the purchase order for new drives, I was considering whether I should not use LVM anymore and go for btrfs. Obvious advantage if upgrade would give me even more flexibility on disc space allocation. On negatives, such transition would require for me to copy all data from old LVM/Ext4 drives to new btrfs-drive. LVM's transition simplicity of entire file system without touching individual files did it for me and I chose to not go for The New Thing™.

Hopefully these platters keep spinning for many years to come.

One of the pieces of hardware I own and opereate is a HP printer. Most of the time it acts as a ... well, paperweight. Then there is an urgent need to have an A4 with information to be delivered somewhere.

As a keen enthusiast for custom TLS certificates, I always take the option to install one. Especially to a LAN-connected device like printer. This one, however, is broken:

All I can manage from it is: "The format of the file is invalid."

For troubleshooting, I looked at Error message "The format of the file is invalid" when attempting to import certificate on HP printer and No more ssl certificate update possible. Both are pretty much stating it doesn't work. Couple years ago in Installing TLS certificates on HP printers automatically the thing worked.

In an attempt to solve this, I exported the generated self-signed key as PKCS #12. Certificate has rather "interesting" crypto, pbeWithSHA1And40BitRC2-CBC, Iteration 2048. That is a seriously obsoleted one! Private key has pbeWithSHA1And3-KeyTripleDES-CBC, Iteration 2048, which is also on the tired side. MAC verification has iteration count 1, which is well aligned with the other insecurity.

My conclusion has to be the same: recent firmware upgrades have broken the import.
Multiple hours wasted on that! Darn.