Year and half ago I wrote about my new super-fast Internet-connection. Since in this area the fiber-connections are installed to all buildings regardless you're going to use it or not, I had a possibility to start using also the second one. As the connection was already there, all my telco had to do was send the cable guy to install a fiber to copper media converter.

Or, so you'd think. The standard operating procedure seems to be to ship out needed hardware from the telco's central warehouse to me and eventually the cable guy would arrive and do the setup. The sales guy failed to mention this procedure to me. I received a shipment of my brand new toys:

I just unboxed all the stuff and started studying how to do the installation myself. My own experience on the subject is highly limited. Whenever fiber-optics are involved, all the installations are done by trained professionals, not curious hackers like me.

Anyway, this is the media converter a CTS (Connection Technology Systems, aka. Zyxel)  HET-3005:

In the fiber-world it seems, that connectors are always inside the box, of course I had to pop the hood: 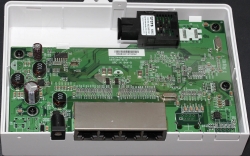 On top of the pic, there is a fiber connector (a SC-connector, I guess): 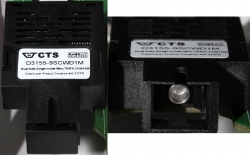 When studying Gigabit Ethernet, the only possible ones are:

For obvious reasons of not having dual-rate in it, LX10 goes out. However in BX10, it's funny how specs mention downstream to be 1490 nm, but the equipment has 1550 nm.

So, only with the box, there isn't much to do. Luckily they kinda knew it and in the box there was a suitable patch cable:

The ends are different. I don't know why, but studying the Wikipedia article about Optical fiber connector says, that IEC 61754-4 defines a SC-connector. A careful analysis of it revealed, that the square one wasn't a match for the HET-3005. The wider one with non-square form fits in nicely: 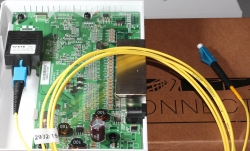 Now I'll need to figure out what to do with the other end. I went to study the connections. A following box with obvious incoming fiber-optic cable rising from the ground was attached to a wall: 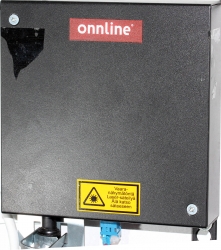 Sure thing, I popped the hood on that to see what it had eaten: 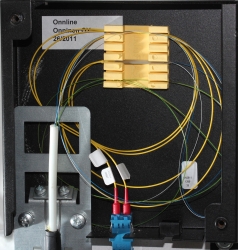 At the lower left hand corner, there is a black cable incoming. The cable guy stripped it and exposed the single-mode fibers in it (two of them) and welded them into the fiber of the blue connector. The welds have been properly covered with some sort of shink-wrap and can be seen in the yellow cable holder. Since the black box was a dead end, it had no electrical parts in it, my next focus was the blue connector at the bottom of the box:

That red connector had a fiber running to a box converting fiber to a DVB-C -signal and distributing that on a 75 Ω coaxial cable for TV-signal distribution into my house. However, the right connector was free. I simply had to try it:

Yep! A nice fit. The more important thing was, that it made my media converter box to indicate a functioning WAN-signal.

Just to confirm the SC-connector, I went back to pictures of my Inteno FG500, it had:

But that's inside the box, it has dual-purpose functionality of doing TV-signal and ethernet in two halves of the same unit.

After couple of days me finishing the install, the cable guy called in and wanted to come do the setup. I just told him that's its all done and ready.