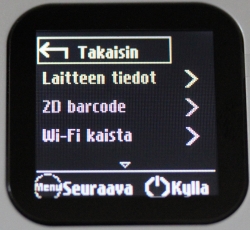 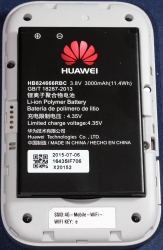 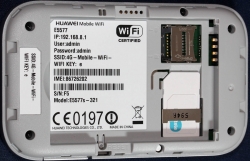 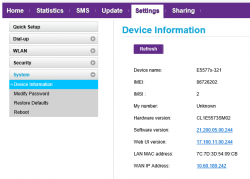 Hi,
I'm searching for an option to start this device (E5577) without pushing manually the ON/OFF button.
I mean is there a way to setup the device to start and boot automatically when electric wire is plugged in?

I need to create a solar powered system. If E5577 stops working because of battery, is it possible to restart it automatically when the solar panel will receive sunlight and give power?

Thanks for your help

As I said, an E5577 is essentially an Android cell phone. They just packaged it differently not to look like one, but inside it is. If you can lure an Android to do that, your next move is to hack your E5577 to do the same. Rooting and hacking a real cell phone is much easier for starters.
Comments (9)
#1.1 Jari Turkia on 2016-04-19 09:45 (Reply)
I Have bein trying Using the E5186 api to send a message . But I was stopped on error 100003
I use token and session fully.
I am using a Httprequest language (PCSOFT)

i only have checkbox on/off for "support LTE networks"

i only notice i have a different version maybe updated.

And you question about the missing "preferred mode" reveals that you're a Huawei newbie. Huawei doesn't sell their hardware trough regular shops, they sell only to telcos. For example in Finland you can actually go to a non-telco store and buy a Huawei LTE-thingie, but it has been branded to one of the three major telcos at Huawei factory. Telcos just happen to be re-selling their imported stuff to third party vendors for resale. This seems to be a global approach they have.

When a telco does their own Huawei-deal, they'll get a firmware-modification-kit to mod their own personalized firmware the way they want the customer to experience their hardware. At that phase crappy telcos strip off "unwanted" features. Luckily the Finnish ones aren't doing that anymore. But anyway, Huawei firmware can have exactly the same version and still have less/more features than other telco's hardware does.
Comments (9)
#4.1 Jari Turkia on 2016-06-29 21:58 (Reply)
I have 5577 and cannot make external MIMO antenna to work - the signal drops as soon as the antenna is connecteed. Antenna seller refers to some "Antenna mode" setting in Web Ui, but my router (Tele2 branded) has no such setting. Could it be because of the custom firmware?
Comment (1)
#4.1.1 Andris Kurmis on 2016-07-14 20:48 (Reply)
I'm interesting with this modem, my question is how strong signal receiver from this device?
Comment (1)
#5 david jones (Homepage) on 2016-08-18 20:36 (Reply)
Did you notice the two bars out of 5 in the images, or data from /api/device/signal in the post?

The unit is located inside a house in quite a poor location, so I'd say the antenna reception is what you'd expect from a plastic thing without any real antennas attached to it. The RSRP value of -108 dB is on the low side (see details in my iPhone field test mode post https://blog.hqcodeshop.fi/archives/253-iPhone-cell-Field-Test-mode.html). As stated number of times, the tech inside is pretty much an Android phone, including any RF-technology.

Have you an idea why?