Couple months ago there was a real good deal in Humble Bundle for eBooks. For those of you who don't know what Humble Bundle is, it's a for-business subsidiary of IGN Entertainment (which again is a subsidiary of Ziff Davis). Unlike regular charities , which just make a plea to give money to them, Humble Bundle makes deals with software vendors to sell products which are way past their prime money-making age. Their slice of the operation is ~20% and the rest goes to software vendors and the charity of your choosing. In many cases you can choose the charity:software-split from range 0-100% and if you feel like it, you can tip Humble Bundle with something extra.

They passed $100M USD donated in September 2017. As there are costs of running the business, they raked in money more than that, but so far nobody has proved that they wouldn't actually deliver on their charity-promise. They are doing business with major corporations and if Humble Bundle would be caught red-handed, they would face a horde of lawyers suing their asses. For the time being, I choose to believe that they keep their promises and occasionally when I see something interesting in their mailing list, keep sending my money to them.

About the author, Kevin Mitnick

Ok, enough Humble Bundle, this is supposed to be about the book.
Since the deal was sweet, I went for it and paid couple € for the de-luxe bundle of security-related books (I think the actual amount was in region of 25 €). They delivered the download link for unlocked PDFs instantly after my PayPal payment was accepted. So, now I'm a proud owner of 14 books about information security. 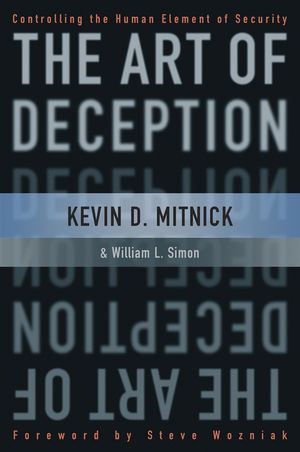 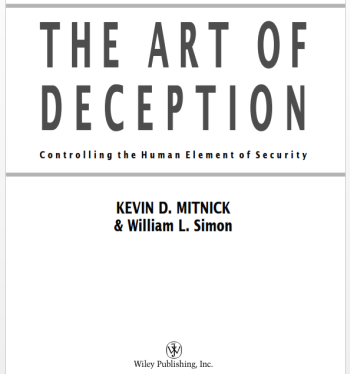 The one book that I really wanted was the famous Art of Deception by Kevin Mitnick, a reformed bad boy who turned white-hat hacking. A warrant to arrest him was issued back in 1992 and he managed to evade FBI till February 1995. Since there was no applicable legislation in USA to convict him from the cracks he made to various US Government agencies and private corporations, US Department of Justice managed to keep him incarcerated for 4 and half years without bail or trial. When he got released to general public, a judge slapped a 7 year ban for him not to profit from selling books or movies, still on 2002 he put together this book and managed to get it published. He also published a book The Art Of Intrusion: The Real Stories Behind The Exploits Of Hackers, Intruders, And Deceivers in 2005, but it's unclear to me did he profit from them at all. Wired confirms, that the ban from profiting ended in January 2007. If anybody knows that, please drop a comment.

Well, enough of the author, this is supposed to be about the book.
The stories about social engineering tricks either Mr. Mitnick pulled off himself or the stories he describes in his book are really intriguing. But at the same time the technical details are vastly outdated, remember it was published in 2002 and stories are from 60s to 90s. Reading stories about dial-up modems, faxes and landline telephone voice mails make me laugh in the wrong place of the story. So, while reading, I was constantly thinking if it would be possible to pull off a similar feat in the modern world.

The books is written on four sections. Parts 1 and 2 are more about how social engineering works. There is always sonebody with poor awareness, either by not doing what was instructed or the instructions are missing or poorly done to begin with. Part 3 contains the "war stories" how people were fooled to say or do something they wouldn't normally do and while doing it didn't understand the value of their deed to the opposing party. To summarize, it's never a single piece of information which can compromise your organization, it's always a combination of things. To pull off such a social engineering hack, you must have detailed information about procedures and find a weak spot there. Also, most of the hacks are done to multi-site corporations. If your organization is geographically bound to a single location, it will be very hard to call in and request something "for my boss" at the remote site. My experience about small and medium sized Finnish companies is, that most people know everybody at least by name. Any incoming call would immediately raise suspicion and would question the caller's true agenda and identity.

Part 4 contains instrictions how to prevent such socical engineering attacks. For anybody not making security policies that part might be little bit boring. Here is an example of a flowchart how to train personnel: 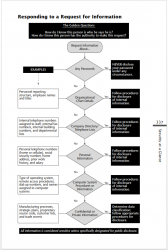 Given in modern world, that government organizations don't need to pull of such hacks to get your information. You've already volunteered all of that! All they need to do is capture it from your cloud service provider's hard drive. Also, generally speaking personnel are more aware of possibility for social engineering. In his CeBIT Global Conferences 2015 video he claims, that for example dumpster diving still works. I personally wouldn't believe it. In Europe we don't need to print source code o passwords to paper and if we would be that stupid, there is a special secret-material-to-be-destroyed -paper bin at the office for such confidential waste.

Also, I remember seeing a video (... which unfortunately I was unable to locate) of Mr. Mitnick describing an assignment he got from a company, where his social engineering failed. It happened, that the receptionist knew about it. When Mr. Mitnick was requesting for a piece of information to get his assignment going forward, the receptionist actually responded: "Have you heard of Kevin Mitnick's book Art of Deception?". So, that was an example of well trained personnel to save that day. But unfortunately the book doesn't have a single example of social engineering failing. I was kinda expecting to see some of those.

About recommendations: people already knowledgeable about social engineering and feats that Mr. Mitnick pulled off don't get that much out of the book, but for everybody else, the book offers mind-opening stories, which can be reflected in everybody's real life. When somebody asks you for something they should already know, it may be time to think about social engineering.

If you have 6 minutes to spare, here is a DEF CON 23 video of Mr. Mitnick pulling off a social engineering hack, with permission from the target corporation, targeted to a pre-selected employee. They lure the poor guy to go to a website using Internet Explorer, which at the time had a known security flaw in it. That way they get a some sort of remote-access-toolkit to his computer. Nice! But not possible without the actual injection using the flaw being there.