I came back from Christmas holidays on Tuesday 2nd January and quite soon that morning our corporate chat channels were buzzing about this "Intel CPU flaw". Lot of the information came from article The mysterious case of the Linux Page Table Isolation patches. At the end, the author of the post suggests "Invest in popcorn, 2018 is going to be fun". For something written on first day of the year 2018, that is pretty well said!

More and more details leaked on Wednesday 3rd. The Register article Kernel-memory-leaking Intel processor design flaw forces Linux, Windows redesign suggested said, that Linux kernel team named the flaw as Forcefully Unmap Complete Kernel With Interrupt Trampolines, aka FUCKWIT. So, they must have been mighty annoyed by this one. Urban Dictionary has a rather hilarious explanation of it.

Given the time difference between US an Europe, the information was published late on 3rd January, in form of website Meltdown and Spectre - Vulnerabilities in modern computers leak passwords and sensitive data. On Thursday 4th European time, entire Internet was full of news and speculation of these security flaws. Nobody has really confirmed this, but it looks like Intel knew about this flaw back in June 2017, for example Ubuntu-project confirms, that they received information about the flaw back in November 9th.

So, what is fuss this all about?

Since nobody really understands Kernel page-table isolation or Speculative execution, a much simper approach is needed to get a grasp of this problem (yes, you Super-Nerds understand it, I know!).
Xkcd #1938 has the best summary of this flaw that I've seen: 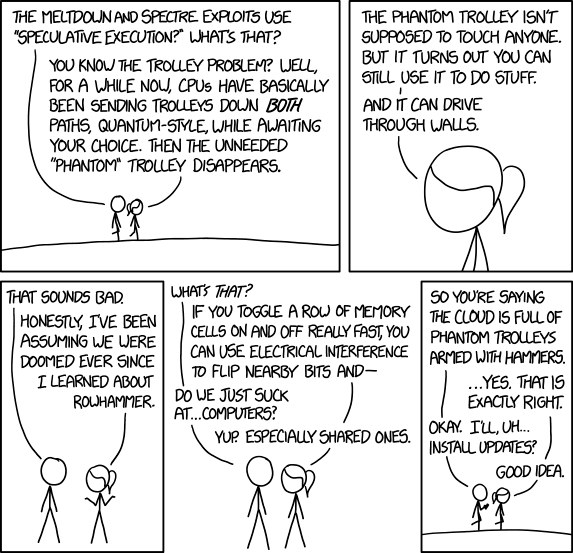 Mr. Daniel Miessler also has pretty good summary of the problem in his post A Simple Explanation of the Differences Between Meltdown and Spectre: 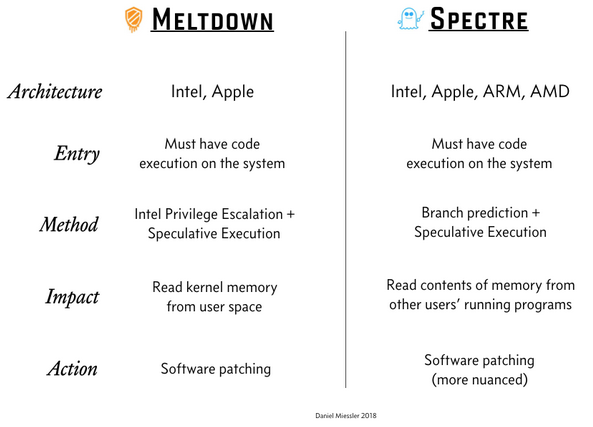 Ultimately you have two choices:

Most cases door #1 is chosen for you by your operating system vendor or cloud service provider.

A real measured effect of the fix

This is what Epic Games measured for their game Fortnite:

While looking at the graph, please remember, that Epic Games didn't choose to have the fix installed. This decision was made for them thanks to cloud computing.

There are number of similar reports all around the web, including Tim Gostony's tweet "Impact of the patch for the Intel bug on my AWS EC2 instances running Linux". It shows much les bump in the CPU-power than Epic Games' graph, but still it is there and it can be noticed.

Ok, everybody's every CPU is affected, but luckily for Meltdown mitigation you wouldn't normally run malware on your computer anyway. For Spectre, it gets scary. It mostly affects shared computers where somebody else is capable of stealing data from your instance.

The #1 thing I'll be waiting most is a physical CPU product that can be purhcased from a store which has a fix for this. Nobody has even promised anything about that. The existing software-based fixes are horrible. For example I was running Progress Quest on a Windows 93 session on a i7 laptop. After the fix, simply starting Windows 93 on a web browser it takes almost all of the CPU instead of idling like it did before the fix.

Amazon Web Services (AWS) in their original statement they said that "This is a vulnerability that has existed for more than 20 years in modern processor architectures like Intel, AMD, and ARM across servers, desktops, and mobile devices." I'm hoping, that it will take less than a decade to get it fixed.

Seriously,If i can read all your coments and I know shag..all,on how these systems work,then it can't be all that private can it???? Come on guys wheres the real justification for all the big who ha about the so called dark web.
Kelly Hubbard
Comment (1)
#1 Kelly Hubbard on 2021-10-08 10:54 (Reply)