Human stupidity has always intrigued me. It is, after all, the driving force of this world. Most people will disagree with me and say, the driving force being money or sex or ... whatever. But take my word for it, it is stupidity! All you have to to is look around and realize, that stupid clowns get elected to powerful positions in democratic systems, idiots are disputing easily proven scientific facts and as an example are claiming that world is flat. Also in our everyday life we do stupid things just because "we always have done so". So, it is stupidity that drives you! People in general are not designed to make critical observations, instead we wired to crowd-behave in a socially acceptable manner. Being stupid.

When taken the context of any regular place of work, two gentlemen Mr. Alvesson and Mr. Spicer took a very close look on this phenomenon. And their book The Stupidity Paradox investigates these. 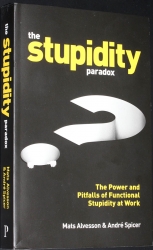 Functional stupidity is the inclination to reduce one's scope of thinking and focus only on the narrow, technical aspects of the job.

Paradox: For an organization, just focusing on a narrow scope is often beneficial. Cutting corners makes everybody's life easier and consumes less resources, it is simply thoughtless and useful. There comes the paradox, your useful thing might be very destructive without you knowing it.

Nobody is safe from functional stupidity, especially smart people are able to wrap themselves in a "comfort zone" or a bubble, where everything they do and say appear smart. Outside the bubble, things may look a bit different.

At the end of the book, authors cover the most important part, how to manage functional stupidity. How to detect it and how to make sure, that it doesn't cause more harm. If such a mighty force is left un-wrangled, lots of damage can be done. Ultimately the cure is simple: create a culture where smart people can observe and criticise day-to-day practices and top-level execs to take the feedback seriously. Sometimes the emperor is naked, insted of having new clothes.

Of all the vivid examples of stupidity in the book, my favorite is The Credit Crunch of 2007. Really smart (but greedy) people created a money-making-machine called CDOs. Those smart people made tons of money to themselves and to their employers, but lost the focus on the big picture. We know how that ended up.

I read trough this book with a mixed feelings. Sometimes laughing out loud but at the same time felt like crying, when the description of functional stupidity ripped open old wounds.