Without thinking it too much, I just went for a SSH-connection on a Windows 10 box with the way it's typically done:

When the result was not a private key passphrase question, but a: Bad owner or permissions on .ssh/config, I started thinking about it. What! What? Why! It worked earlier, why won't it anymore?

For the record:
I am an avid Cygwin user. So, I get a very very Linuxish experience also on my Windows-boxes. So, don't be confused with the rest of the story. This is on a Windows 10, even if it doesn't appear to be so.

Back to the failure. I started poking around the permissions. SSH-clients are picky on private key permissions (also config file), so I thought that something was going on. Doing a ls -l:

Nope. Nothing wrong with that. Still, something HAD to be wrong, as this wasn't acceptable for the client. Doing a which ssh gave it away. I was expecting to see /usr/bin/ssh, not /cygdrive/c/Windows/System32/OpenSSH/ssh!!

So, who put an OpenSSH client to my Windows-directory? Why? When? What kind of sorcery is that? Environment variables: 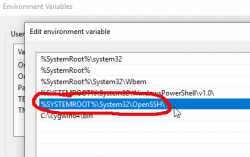 Yes, there is a PATH-entry for OpenSSH before Cygwin. In the directory, there is a full set of OpenSSH-tools:

The expected version in Cygwin is 7.9:

So, to fix this, I yanked the PATH-entry away. Now my SSH-connections worked as expected.

Little bit of googling around landed me on an article OpenSSH in Windows 10! in MSDN blogs. This is on January 2018 and apparently this stuff landed on my Windows in April update (build 1803). Also in article What’s new for the Command Line in Windows 10 version 1803, I found out that also tar and curl were added.

Ultimately this is a good thing. Now that I know this stuff is there as default, there is no need to go load a PuTTY or something for a random SSH-thing you just want to get fixed on a remote box.