Every summer I tend to do some construction work. By construction, I don't mean writing software or fiddling around with computers. By this I actually mean the act of building something from timber and bricks by attaching stuff together with screws and nails to form something new. Any person who owns property knows there is always something needing fixing, facelift or demolition. Also, anybody who has taken such a venture will also know how you can sink your time and money while at it. In case you didn't get the hint: what I'm trying to do here is explain my absence of blogging.

This year, I tore down the back terrace and re-built it. While at it (btw. its not completed yet), I found number of analogies with software engineering. Initially I had a perfectly good back terrace which (almost) served its purpose. It wasn't perfectly architected nor implemented, it was kinda thrown together like your basic PHP-website. It kinda worked, but there were a few kinks here and there. And to be absolutely clear: I didn't architect nor implement the original one. I just happened to be there, use it and eventually alter the original spec.

On moving in, I ordered really nice glassing to the terrace. Everything worked fine for many years and I was happy. This same thing happens with your really cheap hosting provider, years pass by and eventually it will the hit the fan. When it happens, you're left alone without any kind of support wondering what happened and how you're going to fix the site. I found out that by adding the terrace glassing, I had altered the requirements. Now there existed an implicit requirement for the terrace to stay level, as in not move. At all. Any minuscule movement will be ... well ... not good for your glassing making the glasses not slide in their assigned rails as well as originally intended. Exactly like your cheap website, I had no idea how the entire thing was architected. And any new requirements would de-rail the implementation (in this case: literally) making reality hit me into forehead (in this case: literally). During those years of successful living the terrace had moved and sunk a bit into soft sand. Not much, but enough for the glassings to mis-fit.

Upon realizing this, there was no real alternative. Old design had to go and new one needed to be made. Like in a software project, I begun by investigating what was implemented. In construction you would read this as: removing already constructed materials enough to be able to determine how the terrace was founded and how it was put together. In software engineering investigation is always easier and less intrusive leaving no gaping holes to structure. In this project I simply took a crowbar and let it rip. Also, during re-thinking period I came up with completely new requirements. Obviously I didn't want the thing to be sinking nor moving, I also wanted to have the bottom rails of the glassing on top of something hard instead of wood. Any organic material, like wood, has the tendency to twist, warp, shrink, expand and rot. When talking about millimeter accuracy of a glassing, that's not an optimal attribute in a construction material. Experience has shown, that when wood does all of the mentioned things, it does it in the wrong way making your life miserable. So, no more wood. More bricks.

This is what it nearly looked like in the beginning and how it looks like now (I'm skipping the in-between pics simply because they're boring): 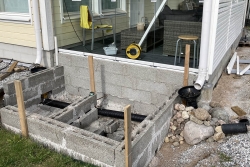 Now everything is back and my new spec has been implemented. During the process of demolition, I yanked out couple of kilos of rusty nails: 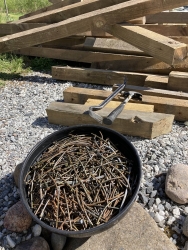 Personally, I don't use much nails, not even with a nail gun. My prefenrece, when it makes sense, is always to attach everything with a screw and I think equal amount of screws have been put into appropriate places to hold the thing tightly together.

Moving foward, I obviously want to complete the new terrace extension. Also, I'd love to get back to computer. Blogging, Snowrunner and such.