Today, Microsoft released KB4577586, Update for the removal of Adobe Flash Player. This is wonderful news! I've been waiting for this moment to happen for many many years. Many organizations will cease to support Adobe Flash end of this year and this release is an anticipated step on that path. Goodbye Flash!

Updates need to be manually downloaded from Microsoft Update Catalog, link: https://www.catalog.update.microsoft.com/search.aspx?q=kb4577586. The reason for this is the earliness. If you're not as impatient as I, the update will go its natural flow and eventually be automatically offered by your Windows. 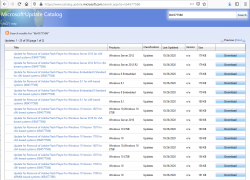 As you can see from the listing, you need to be super-careful when picking the correct file to download. Also, to make things worse, there are some discrepancies in the descriptions: 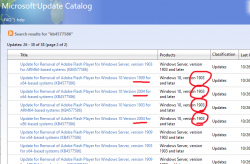 To get the exact version of your Windows, run winver. It will output something like this: 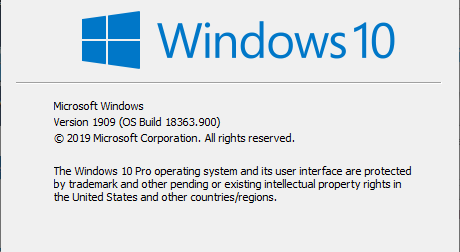 In that example, the package required is for Windows 10 release 1909. To download the correct package, you also need to know the processor architecture. Whether it's AMD-64, Intel-32 or ARM-64 cannot be determined from above information. If you have no idea, just go with x64 for processor architecture, that's a very likely match. Those not running x64 will know the answer without querying.

As a software engineer, I obviously wanted to extract all the required information programmatically. I automated the process of getting to know the exact version your particular Windows is running by writing and publishing a helper-script for PowerShell Core. If you are able to run PowerShell Core, the script is available at: https://gist.github.com/HQJaTu/640d0bb0b96215a9c5ce9807eccf3c19. Result will look something like this:

If you managed to pick out the correct .msu-file, on running it, output will query if you want to proceed with installation: 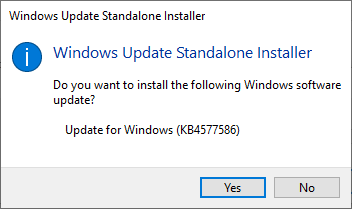 In case of a mismatch, error will say something about that particular update not being applicable to your computer:

After installation, go verify the results of Flash being removed. Running your regular Chrome (or Firefox) won't do the trick. They won't support Flash anyways. What you just did was removed Flash from Windows, aka. Internet Explorer. Go to https://www.whatismybrowser.com/detect/is-flash-installed and observe results:

On a Windows, where KB4577586 hasn't been successfully applied, message will indicate existence of Adobe Flash player: