In computing, typing a password from keyboard is the most common way of authenticating an user.

A Memorized Secret authenticator — commonly referred to as a password or, if numeric, a PIN — is a secret value intended to be chosen and memorized by the user.

Wikipedia in its article about authentication has more of them factors:

Using multiple factors to log into something is the trend. That darling has multiple acronyms 2-FA (for two factor) or MFA (multi-factor). Also notable single-factor authentication method is to open the screen-lock of a cell-phone. Many manufacturers rely on inference factor to allow user access into a hand-held device. Fingerprint or facial recognition are very common.

Since dawn on mankind, humans have used passwords, a knowledge factor. Something only select persons would know. With computers, it began in MIT, where Mr. Fernando Corbató introduced it the first time. And oh boy! Have we suffered from that design choice ever since. To point out the obvious flaw in my statement: Nobody has shown us anything better. Over 70 years later, we're still using passwords to get into our systems and software as there is an obvious lack of good alternative.

Going for a bit deeper into practical authentication: SSH - Secure Shell, the protocol used to access many modern computer systems when HTTP/HTTPS doesn't cut it.

Borrowing figure 2-2 from chapter 2.4. Authentication by Cryptographic Key of the book SSH: The Secure Shell - The Definite Guide:

This figure depicts an user, Pat. To access a server shell.isp.com Pat will need a key. In SSH the key is a file containing result of complex mathematical operation taking randomness as input and saving the calculated values into two separate files. The file called "public key" must be stored and available on the server Pat is about to access. The second file "private key" must be kept private and in no circumstances nobody else must have access to results of the math. Having access to the set of files is an ownership factor. If Pat would lose access to the file, it wouldn't be possible to access the server anymore.

In this case Pat is a security conscious user. The private key has been encrypted with a password. Authentication process will require the result of the math, but even if the file would leak to somebody else, there is a knowledge factor. Anybody wanting to access the contents must know the password to decrypt it.

Any regular Joe or Jane User will try to remember his/her passwords. To actually manage that, there can be a limited set of known passwords. One, two or three. More than four is not manageable.

When thinking about the password you chose, first check You Should Probably Change Your Password! | Michael McIntyre Netflix Special, or at least read the summary from Cracking Passwords with Michael McIntyre. Thinking of a good password isn't easy!

As Mr. McIntyre put it, many systems require the password to be complex ones. Xkcd #936 has a cartoon about it: 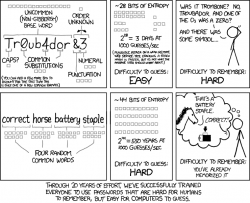 You may remember something long enough, but you won't remember many of them. Especially when there are tons of complex instructions on selecting the password. The NIST 63B in section 5.1.1.2 Memorized Secret Verifiers states following:

When processing requests to establish and change memorized secrets, verifiers SHALL compare the prospective secrets against a list that contains values known to be commonly-used, expected, or compromised.

For example, the list MAY include, but is not limited to:

Those four are only the basic requirements. Many systems have a set of rules of their own you must comply. Very tricky subject, this one.

My view on passwords

The attempt of trying to remember passwords or PIN-codes is futile. The entire concept of user simply storing a random(ish) word into brain and being able to type it via keyboard will eventually fail. The fact this will fail is the one fact bugging me. Why use something that's designed not to work reliably every time!

How I see password authentication is exactly like Pat's SSH-key. He doesn't know the stored values in his SSH private and public keys. He just knows where the files are and how to access them. In fact, he doesn't even care what values are stored. Why would he! It's just random numbers generated by a cryptographic algorithm. Who in their right mind would try to memorize random numbers!

My view is: a person needs to know (knowledge factor) exactly two (2) passwords:

Nothing more. Two passwords is manageable. Both of them don't need to be that long or complex, you will be entering them many times a day. The idea is not to use those passwords in any other service. If either of those two passwords will leak, there is only yourself to blame.

Obviously I live by the above rule. I have access (or had access at one point of time) to over 800 different systems and services. Yes, that's eight hundred. Even I consider that a lot. Most regular people have dozen or so passwords.

As already stated: I don't even care to know what my password to system XYZ is. All of my passwords are randomly generated and long or very long. In my password vault, I have 80+ character passwords. To repeat: I do not care what password I use for a service. All I care is to gain access into it when needed.

There are two pieces of software I've vetted and have my seal-of-approval of password storage: Enpass (https://www.enpass.io/) and BitWarden (https://bitwarden.com/). I've had numerous (heated) conversations with fans of such software products as Keepass, Lastpass, and so on. They are crap! I don't need them and won't be using them. My first password vault was SplashID (https://splashid.com/), but they somehow fell out of my radar. They were secure and all, but lack of flexibility and slow update cycle made me discontinue using them.

In case of my vault file leaking, to make it very difficult to crack open my precious data from SQLite Encryption Extension (SEE) AES-256 encrypted file there is a two-factor authentication in it. Anybody wanting access needs to know the encryption password and have the key-file containing a random nonce used to encrypt the vault.

Using passwords is not going anywhere soon. A lot of services have mandatory or semi-mandatory requirement for multiple factors. Also additional security measures on top of authentication factors will be put into place. As an example user's IP-address will be saved and multiple simultaneous logins from different addresses won't be allowed. Second example: user's access geographic location will be tracked and any login attempts outside user's typical location will require additional authentication factors.

Passwords leak all the time and even passwords stored encrypted have been decrypted by malicious actors. That combined into the fact humans tend to use same passwords in multiple systems, when somebody has one of your passwords, the likelihood of gaining access to one of your accounts jumps a lot. In the net there are tons of articles like Why Is It So Important to Use Different Passwords for Everything? As doing that is a lot of hassle, many of you won't do it.

Cell phones or USB/Bluetooth dongles for authentication will gain popularity in the future, but to actually deploy them into use will require a professional. Organizations will do that, not home users.

Next part in my passwords-series is about leaked passwords.