Wi-Fi. Wireless LAN / WLAN. Nobody wants to use their computing appliance with cords. Yeah, you need to charge them regularily (with a cord or wireless charger). To access The Internet, we all love, is less on wires. The technologies for going wire-less are either mobile data (UMTS / LTE / 5G) or Wi-Fi. Funny how 20 years ago there was no real option, but thanks to advances in technology we're at the point where all you need in life is a working Wi-Fi connection.

Back in 2018 Wi-Fi Alliance® came up wiith this new naming scheme and baptized their latest (sixth) generation as Wi-Fi 6. At the same time, they retro-actively baptized their previous technologies as 5, 4, and so on (3rd gen. or older isn't really used anymore). In their website https://www.wi-fi.org/discover-wi-fi they depict Wi-Fi generations as follows:

Most typically, you're running on Wi-Fi 5. That's with an 802.11ac transmitter. If you never left 2.4 GHz band there is a likelihood you're still stuck on Wi-Fi 4 with ~10 years old access point. There is wery low chance you're still on Wi-Fi 3, that hardware is nearly 20 years old. Not many consumer-grade electronics last that long.

A practical example on how operating system might use the Wi-Fi symbols from Android. This is what my phone used to look like until some random product owner at Google decided that those symbols are too confusing, dropped them in an OS upgrade and now my Nokia 5.3 won't display the numbers anymore:

Anyway, the 2.4 GHz band is pretty much dead. Don't miss the fact there are no advances happening on lower Wi-Fi -band. All the new stuff like Wi-Fi 6 is only on 5 GHz band. This will only affect people trying to use and old phone or laptop and realize it won't connect.

Reason why 2.4 GHz has been abandoned is obvious: your next door neighbour's microwave oven, nearby babymonitors, all Bluetooth stuff and the guy parking his car blipping the keyfob to lock the doors on the street are using that exact same band. Ok ok, a microwave oven shouldn't emit any signal outside, but still the fact reamains, it uses the same band. As an example of 2.4 GHz band traffic, I've personally been in an apartment building with 50+ wireless networks, when counting also nearby buildings, 100+ networks were visible on Wi-Fi search. With an iPhone, if using a proper antenna a search would yield 200-300 networks. All that on a 100-200 meter radius. Yes, that's crowded.

That much traffic on a narrow band results in nobody getting a proper Internet connection. Unless.... you're at 5 GHz band which can take the hit, won't have babymonitors nor microwave owens. 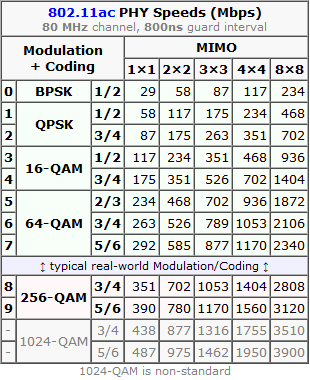 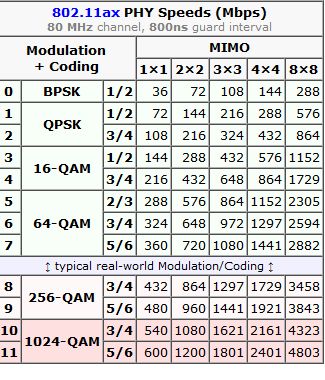 These tables depict the theoretical maximum speeds available at various multiple in/out transmissions (MIMO) aka. simultaneous radios. What a "radio" means in this context is the number of radios/antennas used by the access point and your client. Wi-Fi 4 is intentionally not in this comparison. It was the first generation to be able to utilize MIMO, but it lacked the modern modulation, had less subcarriers and used larger guard interval. Maximum transmission speed for 4-radio 5 GHz Wi-Fi 4 was 600 Mbit/s (1000 for non-standard), much less for 2.4 GHz. By looking at the table Wi-Fi 6 can reach that using a single radio, Wi-Fi 5 with two. So, not reallly a fair comparison.

How many simultaneous radios are you currently using depends. Your current Wi-Fi -connection may be using 1, 2, 3 or 4 radios/antennas, but it depends on how many exist in your access point and phone/laptop. The more expensive hardware you have, number of radios used increases.

Advanced topic: If you really really want to study why Wi-Fi 5 and Wi-Fi 6 speeds differ, there is a really good explanation on how OFDM and OFDMA modulations differ. Most people wouldn't care, but I majored in that stuff back-in-the-university-days.

Besides hardware/radios/modulation Wi-Fi 5 introduced CWAP or Dynamic Rate Selection. Read more about that in this article. To state the obvious, also Wi-Fi 6 (and upcoming 7) will be using this.

Dynamic rate selection improves total bandwidth utilization in access point as clients need to declare the amount needed. If you'lre leeching warez via Wi-Fi, your client-radio will announce to access point: "Hey AP! This guy will be leeching warez, gimme a lot of bandwidth." Then access point will allocate you a bigger slice of the pie. When you leeching is done, your radio will announce: "I'm done downloading, won't be needing much bandwidth anymore." Then somebody else at the same access point can get much more. This type of throttling/negotiation vastly improves the actual bandwidth usage when multiple clients are associated with the same wireless network. Please note: "a client" is any Wi-Fi -connected device including your phone, laptop, fridge and bot-vacuum.

There is 1 interface on the system:

Then while downloading couple gigabytes of Apple iOS upgrade:

There is 1 interface on the system:

Receive / transmit rate varies from 1.5 Mbit/s to 400 Mbit/s depending on the need.

How dynamic rate allocation can be determined in Linux or macOS, I have no idea. If you do, please, drop a comment.

When looking wifi security today, WPA/WPA2 is broken. WPA2 was introduced in 2004 with Pre-Shared Key (PSK). Later in 2010 WPA Enterprise Authentication Protocol (EAP) was introduced and it is still considered secure. For a home user like you and me, EAP is very difficult to setup and maintain. Hint: the word "enterprise" says it all. As bottom line, nobody is running it at home, all enterprises are at the office.

Around 2017/2018 number of cracks were introduced to erode security of WPA2 PSK making it effectively crackable, not completely insecure, but with some effort insecure. One example out of many: Capturing WPA/WPA2 Handshake [MIC/Hash Cracking Process]

To fix this insecurity, carefully designing the new Wi-Fi security model for 14 years Wi-Fi Alliance introduced WPA3. The un-cracable version. EAP is still there in WPA3. Insecure PSK has been obsoleted and replaced by Simultaneous Authentication of Equals (SAE) which is claimed to be cracking resistant even for poor passwords.

WPA3 is not bound to radio technology used, but given consumer electronics manufactures, they're not going to add a completely new security feature to old hardware. So, practically we're speaking Wi-Fi 5 or newer. If you're at Wi-Fi 6, you'll definitely get WPA3. Update: Any WAP3 hardware manufactured after 1st July 2020 will have mandatory WPA3, before that it was optional.

Enough theory. Now we know 802.11ax is secure and pretty fast. Now we need to see how fast (security is really difficult to measure). There is one practical obstacle, though, Wi-Fi 6 hardware at the time of writing this is well ... uncommon. Such access points and clients exist and are even generally available. Me being me, I wouldn't buy a random access point, oh no! My AP will run DD-WRT or OpenWrt. That's the hurdle.