Why Windows 11 won't be a huge success

Why Windows 11 won't be a huge success

Lot of controversy on Microsoft's surprise release of Windows 11. I'm not talking about when they declared Windows 10 to be the "last Windows" and then releasing 11. Also changes in GUI have lots of discussion points. Neither the forced requirement of TPM2.0 which can be lowered to TPM1.2 with a registry change is not the deal-breaker. Is somebody whispering "Vista" back there?

What really makes all the dominoes fall is the lack of CPU-support.

In above graphs is visualization of three pieces of informatinon I scraped. First I took the list of Windows 11 supported CPUs from Windows Hardware Developer - Windows Processor Requirements. Then I went for https://ark.intel.com/ to collect Intel CPU data. Also did the same for https://www.amd.com/en/products/specifications/. As for some reason AMD releases only information from 2016 onwards, for visualization I cut the Intel to match the same.

Ultimate conclusion is, Microsoft won't support all Intel CPUs released after Q2 2017. With AMD stats are even worse, threshold is somewhere around Q2 2018 and not all CPUs are supported. Percentages for AMD are better, but also their volume is smaller.

If you want to do the same, I published my source code into https://github.com/HQJaTu/Windows-CPU-support-scraper. When run, it will produce a Google Spreadsheet like this: 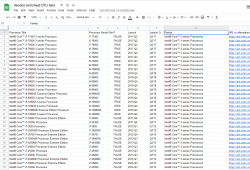 ... which can bevisualized further to produce above graphs.

One of my laptops is a Lenovo T570 from 2017. It ticks all the Windows 11 installer boxes, except CPU-support. Obviously, CPU-support situation is likely to change on progression of time, so I may need to keep running the scripts every quarter to see if there will be better support in the later releases of Windows 11.