Since my August blog post about vacdec, the utility to take a peek into COVID-19 passport internals, I've got lots of feedback and questions. The topic, obviously, touches all of us. As this global pandemic won't end, I've been following different events, occurrences and incdients around digital COVID certificates.

To anybody working with software, computers, data, encoding and transmitting data, especially in the era of GDPR, it's second nature to classify data. There is public data, confidential data, data containing GDPR-covered personal details, to classify by simple three criteria.

What's puzzling on how EU Digital COVID Certificate QR-codes where shown in media. Personally I contacted four different journalists in fashion of "Hey, you published all of your personal details in form of a QR-code. Please, retract and do not ever do that again." One journalist I talked in person and his comment was "I couldn't fathom this black-and-white blob should be kept secret!"

These leaks weren't by small and insignificant media. The codes I saw were portrayed from 9 o'clock evening TV news (cinematographer's cert), website of print media (journalist's own cert), Internet news video (producer's cert) and paper print of news (not sure whose cert that was).

As these bloopers aren't regularily seen anymore, it seems all of the media outlets have issued internal memos for not to display the QR-codes in a readable format anymore. I have facts of one media outlet's internal memo informing people not to publish real certs publicly. One positive change is most of them are using sample certs when they really want to portray a QR-code.

In one instance, I bumped into a script-kiddies masterpiece. He was convinced of the possibility of brute-forcing the ECDSA-256 private key of one COVID Certificate issuer. I eyeballed the Python-code and indeed, it approached the problem by doing an nearly-forever loop of picking 256 random bits to match those bits against the public key. Nice! By carefully choosing the bits, that is how the thing works.

However, some suspicions rose. There was a comment in the discussion thread  saying: "I don't think this code is working. My home computer has been crunching this for two weeks now and there doesn't seem to be any results."

Really! REALLY!!
These kids really have no clue.

Somebody in Germany got their hands on the actual certificate issuing private key and did throw out couple fully valid and totally verifiable COVID certificates for different names. There were at least three different ones circulating that I know of. Here is one (notice the green color indicating validity): 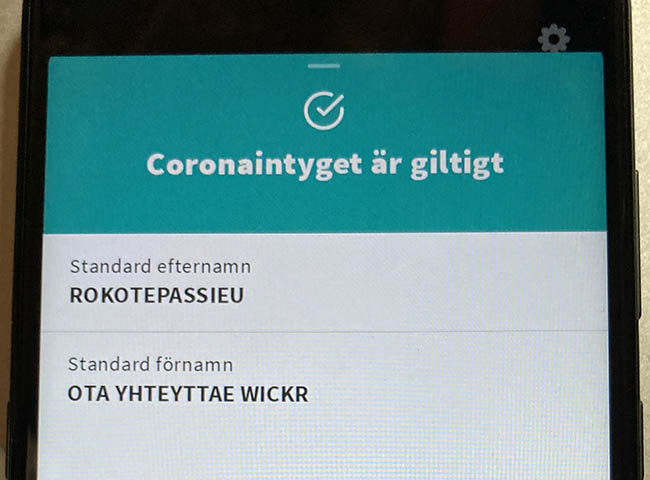 This one was targeting Finnish customer pool and had first name of "Rokotepassieu" which translates as "Vaccination passport EU". Surname translated: "Contact me via Wickr" (for those who don't do Wickr, it's an AWS owned messaging app with highest standards on security).

According to Swedish government list of valid certificates, Germany has 57 sets of keys in use (disclaimer: at the time of writing this post). What German government had to do is revoke the public key which private key was misplaced. For thousands of people who had a valid COVID cert, they had to get theirs again with different signing key.

This kind of incident/leakage obviously caught attention from tons of officials. Making sellers' business dry up rather swiftly. Unfortunaly no details of this incident were disclosed. The general guess is for some underpaid person to be doing darknet moonlighting on the side with his access to this rare and protected resource.

In Italy roughly thousand COVID certs issued to actual people were made available. I downloaded and processed couple thousand files in four different leaks just to find out most of the leaked certs were duplicates. I did combine and de-duplicate publicly available data. Here are the stats: 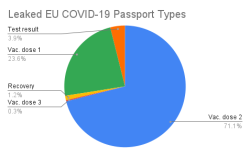 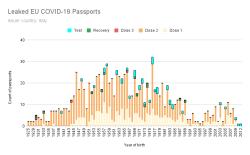 All leaked certs are still valid (disclaimer: at the time of writing this post). However, Italian government has only three sets of keys in place and replacing one would mean rendering 1/3 of all issued certificates as invalid. They have not chosen to do that. Most likely because the certs in circulation are harvested by somebody doing the checking with a malicious mobile app.

No surprises there. Most of them are for twice vaccinated people. Couple certs are found for three times vaccinated, test results and recovered ones. What's sad is the fact that such a leak exists. These QR-codes are for real human beings and their data should be handled with care. Not cool.

This unfortunate pandemic isn't going anywhere. More and more countries are expanding the use of COVID certs in daily use. For any cert checking to make sense, the cert must be paired with person's ID-card. Crypto math with the certs is rock solid, humans are the weak link here.