For ages spammers' tactic has been to use either free trial of a service or payment via "liberated" credit card. As public cloud service providers want to lure in new customers, there is a habit of offering non-paid services for a period of time. All major providers like AWS, Azure and Google Cloud Platform have such free-of-charge use available.

Also smaller companies have such offering. Smaller companies (are still quite big, but not as big as biggest ones) would include Hetzner and OVHcloud. Both have number of data centers around the Europe and for any postmaster, are a royal pain in the ass. You can get a really cheap VM on either and start spewing spam email into unsuspecting SMTP-servers, like the one I maintain.

This type of free-spam-for-all isn't sustainable, or hasn't been for years, but these companies still allow it to happen. In 2021 Hetzner made a change for better. Lot wasn't communicated, however, this information was published to its customers:

Microsoft maintains their own internal blacklists, which are used to reject emails coming from specific IP addresses.

As a customer of Hetzner having an operational VM, I bumped into a new undocumented restriction applied to new accounts. On my own box, everything still works as usual. Has been for years. To my surprise, outgoing TCP/25 on a new account having a new VM is blocked. What!? Investigating this, led me to Hetzner customer support site, as it has following options for support request: 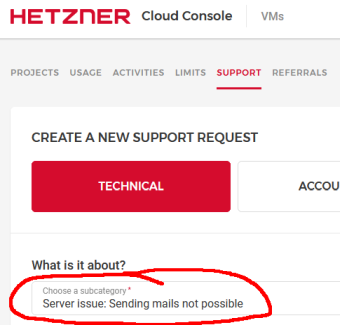 There is a drop-list with different types of problems having a specific category of Sending mails not possible. Apparently somebody designed the support pipeline for that particular need.

Lack of official documentation made me look in The Net. There I found a confirmation of this policy change. In June 2021 Bjørn Erling Fløtten of Norway wrote in his blog post Ditching Windows and AWS, diving into Linux and Hetzner following story:

Step 8: Setting up an email server

(This reminds me of the good old days when a mail server by default usually would be an open relay. Now you definitely get a more secure basic install)

Now I could actually also telnet to port 25 from my Amazon instance, and the connection appeared in the Postfix log. I have no clue why it did not work on the first attempt.

(There is no mentioning of port 25 blocking anywhere on Hetzner's pages. But it is of course natural to assume that port 25 is blocked, even though the firewall administration page of Hetzner's Cloud Console says "All outbound traffic is allowed. Add a rule to restrict outbound traffic.").

So I decided to open a Support ticket, which suggest:
"Server issue"
and
"Server issue: Sending mails not possible"
Choosing the latter gives this:
"Outgoing traffic to ports 25 and 465 are blocked by default on all Cloud Servers.
A request for unblocking these ports and enabling the send mail option is only possible after the first paid invoice."

Fair enough, some thrust needs to be established.

Bjørn: Hint! Get a free-of-charge TLS-certificate somewhere. Most browsers refuse to enter your site. Thanks, though, for sharing your experience. Now I know to first wait for the invoice and then request for the ports to be opened.

Hetzner: Hint! Would it be smart to document all of this somewhere? Thanks for this change in your policy, though. Anybody needing SMTP will eventually get access. Deactivating option to spam at will makes life of criminals looking for the-easy-way look for other alternatives. This new policy leaves plenty of details about perpetrator's identity for police to investigate.

Update 19th Sep 2022:
Hetzners rules are both of these need to be true:

By paying, your SMTP-ports won't open. They open only after bit of a wait.