One day I needed to drill a hole to a Cisco firewall. I went to Adaptive Security Device Manager and could not log in. Whaat?! 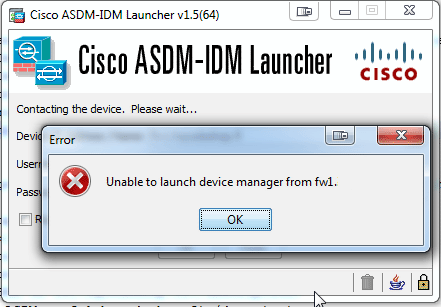 It did work before, but apparently something changed. Sneak peek with Wireshark revealed that SSL handshake failed. Java console has something like this in it:

Little bit of googling revealed Issues Accessing ASDM at Cisco's learning network and Cisco ASDM blocked by Java? at spiceworks.com. So I wasn't alone with the problem. Oracle's release notes for update 51 revealed a number of changes to earlier versions. Java is still piece of shit, but they're trying to fix it. Too little, too late. It is very unfortunate that I have to have Java Runtime installed and use it for a number of important applications. Now Oracle is making radical changes to JRE to improve its flaky security and these customer companies like Cisco cannot keep up with the changes.

Anyway, enough rant, here is how to fix it. The idea is to take the self-signed certificate from the Cisco firewall and import it for Java. This is yet another nice feature of a Windows-computer. There needs to be separate a separate certificate store for operating system, browser and Java.

First go to web-interface of the Cisco appliance. Internet Explorer cannot export a certificate from a web site, so use a Firefox or Chrome or pretty much any other browser. Save the certificate to a file. Like this:

When you have the file, go to Control Panel on Windows:

From there you can find Manage Certificates. Import the certificate-file from there:

It is very, very important that you first select Certificate Type: Secure Site. Any other certificate type won't fix the problem.

On the security-tab there is an exception list for certificates. Adding an exception won't fix this, since the problem is with the fact that the certificate is self-signed.

Now login works again.
When I first encountered this issue, I asked help from couple of guys who are very familiar with Cisco IOS (not Apple iOS). The initial response was "What is ASDM?"

Apparently the GUI is not the expert's way to go.