In my network setup, it's almost done: we have 1) an Internet-connection, 2) a wireless access-point to pass some mobile device traffic trought it, but something is missing: a router to tie it all together. In my post about my Swedish ISP, it became evident, that running a router they threw at me for free wasn't an option. Second completely viable option would be to run my new Wi-Fi AP with DD-WRT as a router. Totally doable. It has all the suitable ports, DD-WRT is fully equipped to act as an internet router and all that.

Me being a total nerd, of course I wanted to build a real router. The suitable hardware for it would be something tiny having enough ports and packing suitable CPU/RAM/SSD to run a real Linux in it. So, my choice for this is:
Qotom Barebone Mini PC Linux Ubuntu Wintel Nano ITX Celeron j1800/1900 Mini Computer Desktop PC Fanless x86 pc Industrial PC Computer. The marketing people at Qotom chose an appropriate name for their product, huh!

If I'd choose the name, I'd go anthing with less than 19 words, removed "Ubuntu", "Wintel", double "mini", double "PC" and then start cutting the words into something like: Barebone Fanless Mini ITX PC j1800/1900, or so. But that's only me. 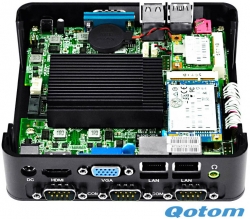 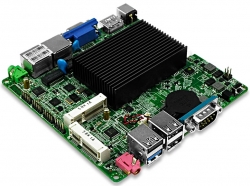 As said, the form-factor is mini-ITX making it a tiny box on the desk. In real life, it looks the same than above marketing material (sorry, pics aren't too good, no DSLR available): 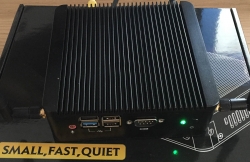 I have no idea who would need 3 x D9 RS-232 -ports, but there they are. My own spec was only to have at least two RJ-45 for Ethernet. This puppy has them with 1Gbit/s speed, adding HDMI and USB-3 on top of that, which are really handy. 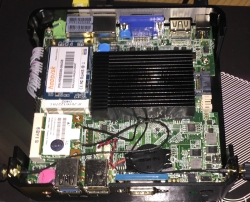 As you can see, there isn't much space around the 17x17 cm mini-ITX -board. The biggest one in the pic is the black cooling block on top of Celeron® J1900 CPU. Close up from the internals:

There is some airspace for cooling inside the box:

For PSU there is an external transformer pushing in 12 VDC at 3 amps:

There is a commonly used IEC C13 on the other end of the transformer to make it easier to plug the thing into your country's choice of wallsocket.

I've been running the box for almost a month now, and I'm very pleased with it. The green power-on LED is way too bright. On a dark room, it illuminates everything with green, but other than that I got the perfect box for a router. As these low-budget boxes are easily available, it's mostly about choosing the most suitable one. Apart from having more than one Ethernet RJ-45, one of my selection criteria for this one was, that the manufacturer didn't take any second guesses about the CPU-cooling. It's easily the biggest block I could find among the competition. On top of that, the manufacturer did deliver the unit from UK-storage quite rapidly. What I missed from seller's page was the fact, that deliveries were made from tax-free -zone. I had to pay Swedish VAT for DHL on top of the purchase price.