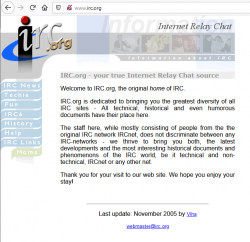 Since 1993 I was there pretty much all the time. Initially on and off, but somewhere around -95 I discovered GNU Screen and its capability of detaching from the terminal allowing me to persist on the LUT's HP-UX perpetually. Thus, I had one IRC screen running all the time.

No more. In 2021 there is nobody there anymore to chat with. I'm turning off the lights after 28 years of service. I've shut down my Eggdrop bots and be on my way.