This one is about Microsoft Azure Cloud platform. Specifically about Azure DevOps Services. And specifically about accessing Azure Active Directory with appropriate permissions and changing settings there. For anybody knowing their way around Azure and Azure AD, there is nothing special about it. Tinkering with AD and what it contains is more or less business-as-usual. Doing the same without a mouse and keyboard is an another story.

Given the complexity of this topic, this part is mostly about getting a reader aligned what the heck I'm talking about. Next part is for a techical person to enjoy all the dirty details and code.

Disclaimer: If you are reading this and you're thinking this is some kind of gibberish magic, don't worry. You're not alone. This is about a detail of a detail of a detail most people will never need to know about. Those who do, might think of this as something too difficult to even attempt.

When talking about DevOps (see Microsoft's definition from What is DevOps?) there is an implied usage of automation in any operation. In Azure DevOps (analogous with most other systems), there is a concept of "pipeline". It's the way-of-working and achieving results in automated way. There are inputs going to the pipe, then steps to actually do "the stuff" resulting in desired output. Nothing fancy, just your basic computing. Computers are designed and built for such tasks, eating input and spitting out output.

Going even further into the dirty details: What if what you desire is to automate the setup of an entire system. In any reasonable cloud system there are: computing to do the processing, pieces of assorted storage to persist your precious stuff, entry-points to allow access to your system and what not. As an example, your cloud system might consist of a: web server, SQL-database, Redis cache and load balancer. That's four different services to get your stuff running. Somebody, or in DevOps, someTHING needs to set all that up. 100% of all the services, 100% of all the settings in a service need to be setup and that needs to be done AUTOmatically. Any knowledgeable human can go to Azure Portal and start clicking to build the required setup.

Doing the same thing automated is couple difficulty settings harder. The obvious difference between a human clicking buttons and a script running is, that the script is a DOCUMENTATION about how the system is built. "I document my work!" some annoyed people yell from the back rows. Yes, you may even document your work really well, but code is code. It doesn't forget or omit anything. Also, you can run the same script any number of times to setup new environments or change the script to maintain existing ones.

Most applications with or without web will never use AD. Then there are software developers like me, who want to store users into such an active location. Lots of other developers abandon that as too-complex-to-do and build their own user management and user vaults themselves with services of their own choosing. That's totally doable. No complaints from here. However, using ready-built authentication mechanisms by fine Azure devs at Microsoft make a lot of sense to me. You're very likely to simply "get it right" by reading couple of manuals and calling the designated APIs from your application. You might even get to be GDPR-compliant without even trying (much).

So, that's my motivation. Be compliant. Be secure. Be all that by design.

Most people can grasp the concept of Active Directory easily. When expanded to AD applications, things get very abstract very fast and the typical reaction of a Joe Regular is to steer away from the topic. If you want to use AD authentication for an application you wrote yourself, or somebody else wrote, this is the way it needs to be done. Not possible to avoid any longer.

So, now my application is compliant and secure and all those fancy words. The obvious cost is, that I need to understand very complex mechanisms, setup my services and carefully write code into my application to talk to those services I set up earlier. All this needs to be done correctly while nothing here is trivial. Couple dozen of parameters need to align precisely right. The good part in all that is: if you make a itsy bitsy tiny mistake, your mistake doesn't go unnoticed. Your entire house of cards collapses and your application doesn't work. No user can use the system. So, ultimately somebody notices your mistake!

Since nobody loves making mistakes, that sure sounds something most people like to AUTOmate. I need to be sure, that with a click of a button all my settings are AUTOmatically correct both in Azure AD and in my own application.

To automate any setup in Azure cloud computing environment, the obvious choice is to use Azure DevOps. As always, there are number of options you can go with, but the fact remains: the most natural choice is to stick with something you already have, doesn't cost anything extra and is very similar to something you'll be using anyway. So, you choose to go with Azure DevOps, or Visual Studio Online or Team Foundation Services on-line or whatever it used to be called earlier. Today, they call it Azure DevOps Services.

In a release pipeline you can do anything. There are tons of different types of tasks available in out-of-the-box experience of Azure DevOps and you can install tons more from 3rd-party extensions. 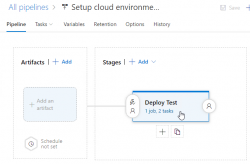 What I have in the above image is a screenshot from my Azure DevOps release pipeline. As you can see, it is a mockup, there is no source artifact it could consume. I was lazy and didn't do a build pipeline to create something there. But for the sake of this blog post, please imagine there being an imaginary artifact for this release pipeline to be able to function properly.

Anyway, there is a single stage called "Deploy Test" to simulate setup/maintenance of my Testing environment. There could be any number of stages before and after this one, but again, I was lazy and didn't do a very complex setup. As the image depicts, there is 1 job in the stage containing 2 tasks. A "task" in a pipeline is the basic building block. Defining a pipeline is just grouping tasks into jobs and grouping jobs into stages forming up the actual process, or pipeline of doing whatever the desired end goal requires. All this can be done in YAML, but feel free to wave your mouse and keyboard the do the same.

Azure DevOps pipeline task of a job of a stage

On the single stage this pipeline has, there is one job containing two tasks. The job looks like this: 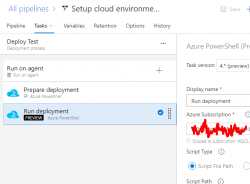 An Azure PowerShell task (read all about them from https://docs.microsoft.com/en-us/azure/devops/pipelines/tasks/deploy/azure-powershell) is a piece of PowerShell script run in a deployment host with a suitable Azure Service Principal (for some reason they call them Service Connections in Azure DevOps) having a set of assigned permissions in the destination Azure tenant/subscription/resource group. This is a very typical approach to get something deployed in a single task. Very easy to setup, very easy to control what permissions are assigned. The hard part is to decide the actual lines of PowerShell code to be run to get the deployment done.

Luckily PowerShell in Azure DevOps comes with tons of really handy modules already installed. Also, it is very easy to extend the functionaly by installing modules from a PowerShell repository of your own choosing on-the-fly in a task. More about that later.

That's the topic of part 2 in this series. Theory part concludes here and the really complex stuff begins.