Microsoft's policy to annoy every Windows 7 and 8.1 user to the point every single one of them will be crazy is something I've addressed earlier. My previous posts are here and here.

Couple days ago I decided to go and upgrade one of my existing Windows 7 boxes. It's roughtly 2 months time left for me to get my free upgrade, also I had been staring enough the re-releases of Update for Windows 7 for x64-based Systems (KB3035583), which every single time I see the upgrade being offered makes me laugh out loud. As you can see: 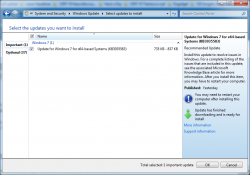 Install this update to resolve issues in Windows. For a complete listing of the issues that are included in this update, see the associated Microsoft KnowledgeBase article for more information. After you install this item, you may have to restart your computer.

Ok. I chose to "resolve issues" in my Windows.

In reality that's just crap that forces me to look at Windows 10 being forced down my throat. That one causes more issues than it resolves. That's a complete lie!

I carefully made sure I have backups and all necessary information and decided that I'm good to go for upgrade. But quite soon I realized, that ... there is no easy way for me to upgrade. As I wrote in my previous blog posts, I've taken drastic measures to deflect any/every possible Microsoft attempt to inject anything related to the upgrade, upgrade widgets, upgrade tools or upgrade pre-loaded files.

So, I decided to go google "windows 10 upgrade", landed at page https://www.microsoft.com/en-us/windows/windows-10-upgrade which very helpfully offers to download a tool called GetWindows10-Web_Default_Attr.exe. Downloading and runnin that does absolutely nothing! I took a peek what it does and it simply runs GWX.exe. Which of course, as a result of my deflector shields again does absolutely nothing. It just fails quietly and exits.

A new plan was needed.

Then I landed on another Microsoft page: https://www.microsoft.com/en-us/software-download/windows10. That one prooved to be much more useful. On that page, there is a download for Windows10Upgrade9252.exe which actually could upgrade my Windows.

The upgrade went fine, I didn't lose too many applications and my user profile survived the upgrade well too. The only thing I had to do was to disable IPv6 privacy randomization. This is my recipe which I run on every one of my Windowses:

Other than that I didn't do much else. And as a result I get to see forced advertisements for Office365. Crap!

I finally did it!
The unit has been non-functional for over a year now. See details in my previous post. But I got it back.

First, I'd like to clarify the myth of "equipment mode". Yes, that does exist. You'll know that your box is bricked and the reason for that is because you're in equipment mode, as your RS-232 -console output will say following during boot-up:

What needs to be done, is getting that Equip_Mode flag off. On "normal" mode bootup, two distinct differences appear at the output:

My sincere thanks goes to Mr. Jevgenij for telling me a magical NVRAM-location to look at.

My bricked B592 s-22 (in equipment mode) looked like this on a boot sequence:

(Sorry about the signal LED glowing, that was my failure when lighting the box for video. I didn't realize that on my footage it looks like being lit, while in reality it isn't. A bricked box won't show any signal there.)

At power-on, the Power-LED gets lit all the others are off. Then the boot-sequence handles lot of hardware and gets a Linux to boot. They call it the "early init". There are no differences between modes at that point.

Next, what happens is the Linux-side taking control and starting to spin up services. One of the first things it does is kicking all the LEDs lit. When enough services are on, and Linux wants to fiddle with LTE-side all the LEDs go off. Now that the device is configured not to offer all hardware services to Linux-side, rest of the boot sequence goes haywire. There is no Wi-Fi, there is no Ethernet-bridge and lot of stuff fail during boot. Your best clue about this dreaded equipment mode is the Tel LED blinking on/off forever. Actually the box is not doing much at that point. It has given up all hope on getting a handle of the LTE-side or the Ethernet bridge.

Luckily, the box is sane enough to allow a SSH-login. In equipment mode, it will bypass the ATP Cli completely and land at the BusyBox-prompt. There your friend is lteat-command. Go back to my older stuff, for details about that.

The prerequisite for the fix is, that you are logged into your B593 s-22 via SSH and are able to run lteat and get sensible response out of it. Example (the blank lines happen on my SSH, I don't know why):

Then you're good to go.

First confirm, that you are in the equipment mode:

That's a ReaD-command for NVRAM address location 52110. To change the mode back to normal, a WRite needs to be issued:

Now all you have to do is power-off your box and kick it back on.

I don't have a clue why/how/when my box went into this "stupidity"-mode. I was fiddling with the LTE-side at lteat-prompt when it happened. I did try dozens of different commands, any of those may have caused that.

Also, if you're unable to SSH into your box, you may need to read my or somebody else's articles. It's all explained there.