Wordle is a popular word game. In just a couple months the popularity rose so fast New York Times bought the whole thing from Josh Wardle, the original author.

As always, a popular game gets the cloners moving. Also another thing about Worlde is the English language. What if somebody (like me) isn't a native speaker. It is very difficult in the middle of a game to come up with a word like "skirl". There is an obvious need for localized versions. In Finland, such a clone is Sanuli. A word-game, a clone of Wordle, but with Finnish words.

From software engineering point-of-view, this is a simple enough problem to solve. Get a dictionary of words, filter out all 5-letter words, store them to a list for filtering by game criteria. And that's exactly what I did in my "word machine", https://github.com/HQJaTu/sanuli-konuli/.

The code is generic to support any language and any dictionary. 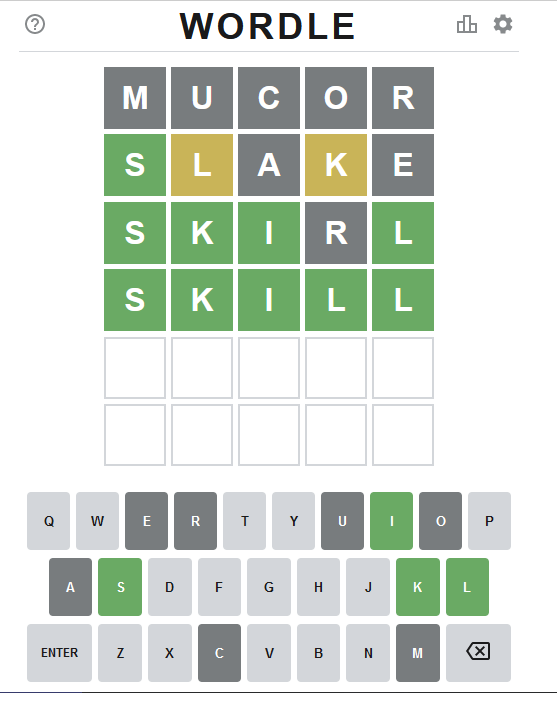 As seen above, that resulted all gray tiles. No matches.

This time game started boucing my way! First letter 'S' is on green and two yellow ones for 'L' and 'K'.

Third attempt wasn't for initial word, this time I had clues to narrow down the word. A command to do this with above clues would be:
find-matching-word.py words/nltk-wordnet2021-5-words_v1.dat "s...." "ae" ".l.k."

Out of multiple possible options, a randomly selected word matching criteria was: "skirl"

Nice result there! Four green ones.
Note: Later, when writing this blog post, I realized the command has an obvious flaw. I should have excluded all known gray letters "mucore". Should my command have been:
find-matching-word.py words/nltk-wordnet2021-5-words_v1.dat "s...." "mucorae" ".l.k."
The ONLY matching word would have been "skill" at this point.

This results in a single word: "skill" which will win the game!

I've been told this brute-force approach of mine takes tons of joy out of the word-game. You have to forgive me, my hacker brain is wired to instantly think of a software solution to a problem not needing one.