Previously I wrote a Wordle-solver, Sanuli-Konuli. The command-line -based user-interface isn't especially useful for non-programmers, so I took the solver a bit further and automated the heck out of it. 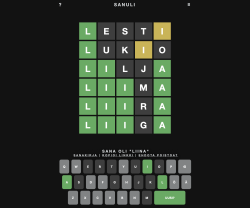 There is a sample Youtube-video (13+ minutes) of the solver solving 247 puzzles in-a-row. Go watch it here: https://youtu.be/Q-L946fLBgU

If you want to run this automated solver on your own computer against Sanuli, some Python-assembly is required. Process the dictionary and make sure you can run Selenium from your development environment. Solver-script is at https://github.com/HQJaTu/sanuli-konuli/blob/master/cli-utils/sanuli-solver.py

The logic I wrote earlier is rather straightforward and too naive. I added some Selenium-magic to solver to write a screenshot of every win (overwriting previous one) and every failure (timestamped). A quick analysis of 5-6 failures revealed the flaw in my logic. As above screenshot depicts, applying improved logic in a scenario where four out of five letters were known and two guesses were still left, changing only one letter may or may not work, but depends on luck before running out of guesses. In improved approach would be to write detect code and when this scenario is detected, doing a completely different kind of "guess" throwing away those four known letters, determining a set of potential letters from set of words and finding a word from dictionary containg most of the unknown letters which would fit would be much smarter approach. Then one letter should be green and rest not, then doing a last guess with that letter should solve the puzzle. So, my logic is good until a point where one letter is missing and then its fully luck-based one.

In above game, guess #4 was "liima" with M as not being correct. At that point of the puzzle, potentially matching words "liiga, liina, liira" would result in potential letters G, N and R, then guess #5 woud be "rangi" (found in dictionary). Making such a guess would reveal letter N as the correct missing letter making guess #6 succeed with "liina".

As I said, this logic has not been implemented and I don't think improving the guessing algorithm any further is beneficial. I may take a new project to work with.

Standard disclaimer applies: If you have any comments or feedback, please drop me a line.