On a non-AD environment, this is what your average Windows 10 Remote Desktop client will emit on a connection: 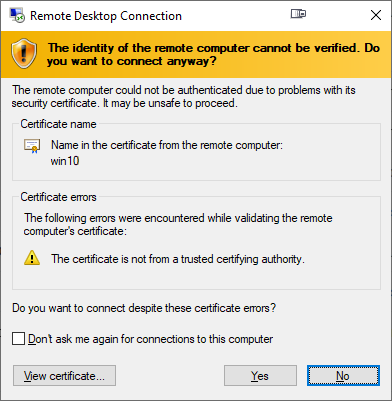 For those who are AD-domain admins, they may have seen this rarely. If an AD has Certification Authority installed, it is easy and typical to deploy certs from it to workstations and never see the above message. The Net is full of instructions like Replace RDP Default Self Sign Certificate.

Problem that needs to be solved

For anybody like me, not running an AD-domain, simply having couple of Windows 10 -boxes with occasional need to RDP into them, that popup becomes familiar.

Note: I'll NEVER EVER click on Don't ask me again -prompts. I need to know. I want to know. Suppressing such information is harmful. Getting to know and working on the problem is The WayⓇ.

If this was easy, somebody had created simple instructions for updating RDP-certificates years ago. Decades even. But no. No proper and reasonable easy solution exists. Searching The Net far & wide results only in bits and pieces, but no real tangible turn-key(ish) solution.

While in quest for information, given existence of The Net, I find other people asking the same question. A good example is: How to provide a verified server certificate for Remote Desktop (RDP) connections to Windows 10.

As presented in the above StackExchange answer, the solution is a simple one (I think not!!). These five steps need to be done to complete the update:

Mission accomplished! Now the annoying message is gone. Do you want to guess what'll happen after 90 days passes? That's the allotted lifespan of a Let's Encrypt -certificate. Yup. You'll be doing the all of the above again. Every. Single. Painstaking. Step.

Problems needing to be solved

Let's break this down. As the phrase goes, an elephant is a mighty big creature and eating one is a big task. It needs to be done one bit at a time.

0: Which cert is being used currently?

If you simply want to get the SHA-1 hash of the currently installed RDP-certificate, a simple (or maybe not?) command of:

... will do the trick. No admin-permissions needed or anything fancy.

To state the obvious problem: you'll be presented a hex-string but you have zero idea to where it points to and what to do with this information.

Hint:
You can to browse Windows Certificate Mchine Store. System certificates are not stored in your personal Certificate Store, so carefully point to a correct container. By default certificates are listed by subject, not SHA-1 hash. Luckily the self-signed RDP-cert is located in a folder "Remote Desktop" narrowing down the set.

To state the second obvious problem: WMI is a tricky beast. Poking around it from CLI isn't easy.

Ok. With that you're on your own. If you cannot figure how Let's Encrypt works, doing this may not be your thing.

In most scenarios, a certificate is typically delivered in a PEM-formatted file or set of two files (one for public and second for private keys). PEM-format is native in *nix environment and all of tooling there can handle the data with ease. Converting the PEM-data into an interim (Microsoft created) format for Microsoft-world can be done, but is bit tricky in a *nix. Usage for this PKCS#12-formatted data is ephemeral, the certificate will stay in the file for only short while before being imported to Windows and there is no need for it anymore. A cert can be re-packaged if needed as long as the original PEM-formatted files exist. Also, the certificate data can be exported from Windows back to a file, if needed.

As PEM-format is native in *nix for certs, it is completely unsupported in Windows. A simple operation of "here is the PEM-file, import it to Windows" is literally impossible to accomplish! There is a reason why instructions have a rather complex spell with openssl-command to get the job done.

When talking about PowerShell-scripting and PEM-format, I'll definitely have to credit people of PKISolutions. They publish a very nice library of PSPKI (source code is at https://github.com/PKISolutions/PSPKI) with PEM-import capability. As Windows Certificate Store is a complex beast, that code doesn't directly work as I'd need it to be for importing into Machine Store. Given existence of source code, the logic they wrote can be lifted, modified and re-used to do what is needed for RDP-cert installation process.

Among PKISolutions' excellent work is blog post by Vadims Podāns, Accessing and using certificate private keys in .NET Framework/.NET Core. There he explains in detail dark/bright/weird ages about how Microsoft's libraries have approached the subject of PKI and how thing have evolved from undefined to well-behaving to current situation where everything is... well... weird.

Why I mention this is imperative for practical approach. PSPKI-library works perfectly in PowerShell 5.x, which is built on Microsoft .NET Framework 4.5. That particular framework version is bit old, and given its age, it falls into bright bracket of doing things.

However, not living in past, the relevant version of PowerShell is PowerShell Core. At the time of writing the LTS (or Long-Term-Support) version is 7.0. A version of 7.1 is in preview and version 6 is still actively used. Those versions run obviously on modern .Net Core, an open-source version of DotNet running in Windows, Linux and macOS. In transition of Microsoft .Net into open-source .Net Core, most operating system -dependant details have changed while bumping things from closed-source-Windows-only thingie. This most definitely include implementation and interface details of Public Key Infrastructure.

In short: PSPKI doesn't work anymore! It did in "bright ages" but not anymore in current "weird ages".

Sticking with an obsoleted PowerShell-version is a no-go. I need to get stuff working with something I actually want to run.

In detail, this involves figuring out how .Net Core's System.Security.Cryptography.CngKey can import an existing key into Machine Store as an exportable one. That was bit tricky even in .Net Framework's System.Security.Cryptography.RSACryptoServiceProvider. Also note, that when I talk about PKI, I most definitely mean RSA and other practical algorithms like ECDSA, which is fully supported in Cryptography Next Generation (CNG). The biggest problem with CNG is, there is lack of usable documentation and practical examples.

Having elliptic curve support is important. RSA is absolutely not obsoleted and I don't see it being so in near future. It's the classic: having options. This is something I already addressed in a blog post this spring.

Most people are using only RSA and can get their job done using old libraries. I ran out of luck as I needed to do something complex. Using new libraries was the only way of getting forward. That meant lots of trial and error. Something R&D is about.

3: Import the PKCS#12-packaged certificate into a proper certificate store of a Windows-machine

When the very difficult part is done and a PKCS#12-file exists and contains a valid certificate and the private key of it, importing the information is surprisingly easy to accomplish with code.

On the other hand, this one is surprisingly complex to accomplish manually. Good thing I wasn't aiming for that.

4: Inform RDP-services which certificate to use

Getting a SHA-1 hash of a X.509 certificate is trivial. Stamping a well-known value into registry is easy. Having correct permissions set was nearly impossible, but ultimately it was doable.

5: Make sure RDP-services will use the certificate

For this, there are number of ways to do. Many of them will involve reboot or restarting the service with a PowerShell-spell of:

Surprisingly, on a closer look there is a way to accomplish this steop without rebooting anything. It's just not well known nor well documented, but Windows Management Instrumentation (or wmic) can do that too! Assuming the SHA-1 thumbprint of the certificate was in variable $certThumbprint, running this single-line command will do the trick:

It will update registry to contain appropriate SHA-1 hash, confirm the access permissions and inform RDP-service about the change. All of which won't require a reboot nor an actual restart of the service. Imagine doing the cert update via RDP-session and restarting the service. Yup. You will get disconnected. Running this WMI-command won't kick you out. Nice!

Set of tools I wrote is published in GitHub: https://github.com/HQJaTu/RDP-cert-tools

As usual, this is something I'm using for my own systems, so I'll maintain the code and make sure it keeps working in this rapidly evolving world of ours.

On the target Windows 10 machine, this is how updating my cert would work (as an user with Administrator permissions):

As I mentioned earlier, I'm using Let's Encrypt. There is a blog post about how I approach getting the certificates in my Linux wth Acme.sh. There is an obvious gap with getting certs from LE with a Linux and using the cert in Windows 10. Files in question need to be first transferred and then they can be used.

Realistic example command I'd run to first transfer the newly issued LE-cert from my Linux box to be used as RDP-cert would be:

The obvious benefit is a simple single command to get and install an RDP-certificate from Linux to Windows. All of the complexity will be taken out. My script will even clean the temporary files to not leave any private key files floating around.

Admins/users: If you enjoy this tool, let me know. Drop me a comment.

Developers: If you love my CNG-import code, feel free to use it in your application. The more people know how it works, the better.