It's alive! Printer ran out of paper

This one really made me laugh. The entire situation was like from T-2: "Skynet begins to learn at a geometric rate. It becomes self-aware at 2:14 a.m."

My new printer ran out of paper and it sent me an e-mail about it.

System Error:  M1-5112 Tray 1 is empty. User intervention required to add paper to Tray 1. Printing can continue if the required media is available from other trays, all other machine services (if installed) are unaffected.     .

The e-mail had all the information about the printer, its IP-address, serial number and printed page counts. If I would have 17 of those, it would be possible to differentiate which one is in trouble.

I was trying to see the remote console of one of my servers:

It said: "Could not create token for this session. Max session limit might have reached". This was yet another reminder that Asus iKVM isn't the sharpest tool in the box, it generally responds slowly and sometimes it does weird things. Thanks to Java, it wasn't easy to get the console application running, it said a number of things, including a complaint:

... but after sorting out a number of Java issues it spat out an error-message with XML-content of:

I found out somebody who had the same issue at Asus' discussion forums article [Problem]iKVM Remote Control Console w/ Java exception error. There was a suggestion to unplug the power cord. In my case the server is couple hundred kilometers away in a secure data center where I certainly do not have any access. Sure, I could write the support and ask them to do that but ... I'm pretty sure there has to be a way to reset the BMC remotely.

Then I remembered something I did a while ago with ipmitool on Linux-shell. Running:

There is a reset-command in the list. Google led me to an article "Restarting an IBM BMC without restarting the server itself". I wasn't sure what would happen. My first guess was that it would do the same thing as typing "google" into a Google search - the entire world would implode to a singularity. So it is very important not to that. But I really needed the remote console. I was willing to try:

Nothing serious happened immediately. The Linux was responsive and world didn't come to an end. After a minute or so, ipmitool bmc info -command yielded a response! The IPMI was back on-line. A logon to web-console:

Yep. I had my console back.

I sure hope that all remote console manufacturers would stop using Java for their apps. It is such a bitch to get a Java application working on after 1.7.0_51 was released. See: "Java 7u51 will not accept JNLP with self-signed certificate?" about other people complaining about that. Anyway, all ended well and I didn't have to drive to the server to do some maintenance.

I needed a new rack-server to fit in a standard 19" telco-rack. Your average rack-mounted server is 60 to 100 cm long. A rack-server may be really thin. 1U (4,5 cm) or less, but really long. Then again, your average telco rack is not long enough for a long server, they may be 40 to 50 cm and not all of them have brackets for mounting the back. My requirement of mounting a server into a telco-rack hugely limits the options to choose a server from. One final requirement I had was that the server must have IPMI 2.0, because that would guarantee KVM over IP.

But after a longish search I found one. The bad news was, that it was a Supermicro, a SuperServer 5015A-EHF-D525 to be exact. Supermicro's track-record on failing IPMI-security is known, see an earlier blog post about it. Anyway, I got a vendor from UK who would order one. They didn't have them in stock and such small rack-servers are quite inexpensive, but don't sell like hotcakes. Who would be crazy enough to want one?

I am, so put an order in with the Boston Ltd. It didn't take them many weeks and I got my server delivered.

Here are the pics from front and back:

In the front there is couple of LEDs, power and reset buttons. In the back there are couple of USB 2.0 -ports and two RJ-45 for 100 Mbit/s Ethernet. It is possible to run IPMI on a shared Ethernet-port or a dedicated one. In my setup I didn't want to have the extra cable and went for a shared setup. The port announces itself as two different MAC-addresses and effectively gets two different DHCP-addresses. One for IPMI and one for the operating system.

This is what it looks inside:

Notice how the Intel SSD -drive is not attached properly yet at the time of taking the pic. The motherboard is really small. The only fan is in the PSU, no other ones are required as the Intel Atom CPU does not produce too much heat and the GPU isn't much of a rocket. The tiny box is almost empty, even with a 2.5" SSD in it.

In the BIOS I found that there is a lot of watchdogging to do, there are two of them:

I don't know what the BIOS watchdog is good for as it keeps triggering if turned on. For the IPMI's watchdog there is a Linux-daemon.

Anyway, except the small size and 32-bit Atom CPU there is nothing special in it. 10 years ago such a server would have been a state-of-the-art box, but on today's standards its just a small low-power unit.

On the positive side, IPMI's web console has a setting for IP Access Control. I tested it and it seems to work. It closes all the ports for everybody else. Since the raw rules are not available for inspection, there still may be couple of network blocks which are allowed. These days you cannot help being suspicious.

On the side there is a slot for MicroSD-card and a standard CRC9-connector which Huawei is using for all of its USB-products. See this vid (with cheesy music) to see an external antenna connected to a Huawei. The pics:

You open the stick by sliding the white cover to left. Then you can insert a mini SIM-card (in my pic there is a micro-SIM to mini-SIM adapter sleeve):

In general it resembles your average Huawei 3G-stick a lot, the only difference is that it is little bit wider. I still remember how big a Huawei E220 felt when the 2nd gen 3G-sticks (E160/E169/etc.) came. As you would expect, when the USB-stick is inserted, it appears as a CD-drive with the classic Huawei Mobile Partner setup in the "disc". After you install the drivers and the software, there is pretty much no way of telling that you are not running on a 3G but a 4G. The mobile partner has features to lock it into LTE-mode and it indicates the connection type of 3G WCDMA, 3G DC and LTE properly.

This is how it looks like on a side of a Lenovo Ideapad S10:

Generally I was pretty pleased with the stick. It is clearly an evolution version of a 3G stick. The feeling is that it is a 3G on steroids. The antenna is very sensitive and my testing revealed that it keeps the connection open even if there is zero bars of reception. However, it is quite expensive currently. In Finland you can get one from a telco with 99,- € with a contract. The unlocked ones are around 150,- €.

It worked on Windows 7 without problems, but as a Linux-man I had to try and see if it works. Unfortunately there are issues with that. Linux recognizes the stick as a Huawei E352 3G-stick, does the modeswitch from storage mode to modem mode properly and a /dev/ttyUSB0 appears, but it does not connect to The Net. A short minicom session indicated, that the modem is there and is receving commands:

It seems to have a new Type Allocation Code code of 86378101 for Huawei. Not all databases have that yet.

The Linux chatter in The Net is that 4g-connect-linux -script should be able to make a connection. I tried it with varying parameters, but somehow the new wwan0-interface didn't have a proper device attached into it and all I got was ioctl SIOCGIFHWADDR: No such device -errors. Search for "cdc_ncm e3276" to get a number of posts about that.

I also did some ping-testing on 3G Dual-Carrier versus 4G LTE. The bandwidth is really a no contest, LTE will win that one hands down as 3G DC has a theoretical cap on 42 Mbit/s. That's pretty much the point where LTE starts! My measurements also confirmed that. A 50 Mbit/s connection limit imposed by the telco measures 69 Mbit/s in reality. Not bad, huh!

The fluctuation in a mobile connection is there. When something happens in the air, there will be delays and retransmissions. But when conditions are nearing optimal, on LTE it is difficult to differentiate mobile connection from a wired one. That's the reason I'm so thrilled about LTE availability. 3G is ok for surfing the web, but LTE is the first mobile technology that really performs!

Final words:
The Huawei E3276 is definitely a keeper. Now that Finnish telcos have an agreement about the 800 MHz 4G usage, they are investing heavily on their LTE-networks. Even pre-paid data has 4G on some telcos. The stick does not replace my B593 which is meant for non-mobile usage, but for a laptop I'll be definitely keep using this one.

First I'd like to apologize. At least twice I've said that it is impossible to force B593 to stay out of 3G-mode and force it to stay on 4G LTE. That is not true. It is an incorrect statement by me and I'm sorry that I didn't investigate the facts before making such statements.

Here is a (slightly photoshopped) screenshot of my own device: 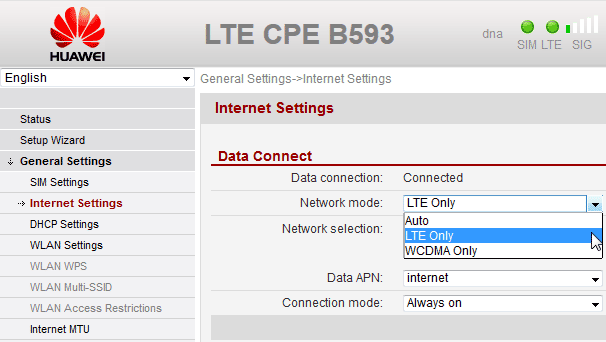 There actually is such an option in General Settings --> Internet Settings --> Network mode. And you can select LTE Only and it will work as expected.

For device hackers, the /var/curcfg.xml will have the setting:

Valid options for X_NetworkPriority "AUTO", "WCDMA Only" and "LTE Only".

After changing the setting my connection has been more stable than ever (on Danish 3's firmware). There has been occasions where my connection has dropped to 2.5G, see the blog post about it, but after fixing the LTE-only -mode things changed to most robust ever.